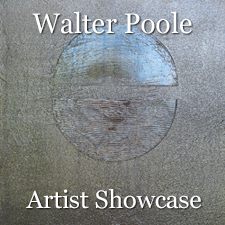 Light Space & Time Online Art Gallery is extremely pleased to announce that Walter Poole has been named as the Gallery’s new featured artist and he will now be promoted by the gallery for the next 14 days in the gallery’s Artist Showcase.

Walter Poole is an Alabama based professional abstract artist.  His preferred media/materials are silver deposit on panel.  Walter was selected as 1 of the top twelve finalists of the gallery’s recent Solo Art Exhibition Series #6. The placement in this competition qualified his art to be showcased in this feature.  Below are Walter's Artist Biography, Artist Statement and 5 images that were submitted to this competition.

Upon graduation from high school Walter found himself in the U. S. Army in a war at age 18. The horrific events witnessed gave Walter an awareness of Man’s capability of brutality that is uncommon among artists or one could say a perception of world reality that most artists cannot comprehend. A catastrophic event occurred leaving him in a wheelchair for several years. While recovering from his injuries he pursued his love for Art at Auburn University in Montgomery, making the Dean’s List. Huntingdon College graciously granted him a merit scholarship to transfer. He was accepted into the graduate program at Auburn University and given a GTA.

After leaving Auburn He gave private lessons to advanced students and spent a short time teaching at the University of West Alabama while at the same time exhibiting in both solo shows and national venues. For personal reasons he left painting for several years traveling across the country returning to the studio in March 2014. Realism was quickly abandoned for contemporary non-representational abstraction using shapes, textures and manipulated light to interact with the viewer.

He works in a unique medium silver nitrate deposit (real silver). His work has been shown in local and national juried venues across the United States and has been featured in publications. Given the short time he has returned to the world of Art his accomplishments are quite amazing. He was given the Benefactors Award at the Northern National in Wisconsin. His greatest challenge is being a progressive contemporary artist in rural Alabama.

The goal is to create positive sublime works that celebrate the good in humanity and contradict the hatred that is so prevalent today. This explains the use of silver.