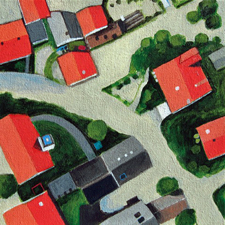 NEW YORK CITY, NY - June 23, 2012 - / Toni Silber-Delerive is very pleased to announce that her painting titled “Flooded Village,” was selected for the 5th Annual National Juried Show which is on view at The Prince Street Gallery in New York, NY. The show opened on Saturday June 23rd and will remain open and on view until Saturday, July 7, 2012. The Prince Street Gallery is located at 530 West 25th Street on the 4th Floor, New York, NY, 10001 and their telephone is 646-230-0246

Prince Street Gallery hosts annual Juried Exhibitions and past Jurors have included William Bailey, Philip Pearlstein, Irving Sandle, and Susanna Coffey. This year’s Juror was Yvonne Jacquette. Jacquette’s paintings, prints and pastels are in the permanent collections of the Metropolitan Museum of Art, the Brooklyn Museum, and the Staatliche Museum in Berlin. She has been honored by the American Academy of Arts and Letters and she is represented by the DC Moore Gallery in New York City.

Prince Street Gallery represents both established and emerging artists. The gallery first opened its doors on Prince Street in SoHo in 1970 and emerged out of the Alliance of Figurative Artists and received encouragement from The New York State Council on the Arts. In 1980, the gallery moved to Wooster Street where it remained until 2001, when it reopened at 530 West 25th Street in the Chelsea Art District. More information is available about the gallery and their events on their website www.princestreetgallery.com

Toni Silber-Delerive is a Manhattan based artist and graphic designer. Her work is represented in private and corporate collections both here and abroad. Toni has participated in many solo and group exhibitions and she received my B.F.A. in Painting from the Philadelphia College of Art.

Further information on Toni Silber-Delerive and her art is on her website www.tonisart.com.