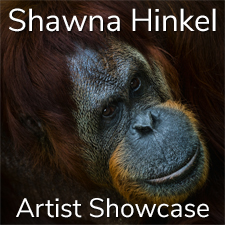 Light Space & Time Online Art Gallery is extremely pleased to announce that Shawna Hinkel has been named as the Gallery’s new featured artist and she will now be promoted by the gallery for the next 14 days in the gallery’s Artist Showcase.

Shawna is an award-winning artist based in Dallas, Texas, USA. Shawna was selected as 1 of the top twelve finalists in the gallery’s 18th Solo Art Exhibition Series. The placement in this competition qualified her art to be showcased in this feature.

Shawna’s Artist Showcase feature will be promoted to over 350+ major news outlets, with inclusion on Google News & Bing News. In addition, the gallery will also be featuring and promoting her artwork in the gallery’s various social media networks for further exposure.

Below are Shawna’s Artist Biography, Artist Statement and 5 images that were submitted to this competition.

It has been said that “the eyes are the windows to the soul,” and I have found this to be true. Not only in people, but also in animals - most especially in the great apes. My series “Almost Human” explores the eyes and expressions of these magnificent creatures, looking for the souls in our most closely related counterparts. Chimpanzees, gorillas, and orangutans are so much like us that if you spend a little time with them, you can almost tell what they are feeling. Some are young and playful, some are old and wise, and some are shy and do not want to be bothered. They all have very different personalities and spirits. I want to show the heart of these beautiful animals so more people can find a deeper understanding and affection for them, and learn more about the conservation efforts in place to help them. What a better world it would be for man and apes alike. 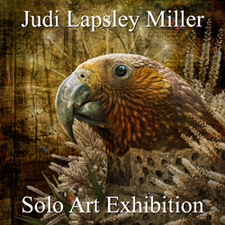 Light Space & Time Online Art Gallery is very pleased to announce that Judi Lapsley Miller has been selected as one of the four artists of the gallery’s seventh “Solo Art Series” Art Competition.  Judi will now have a month long solo art exhibition and she will be featured on the gallery’s front page, in the Gallery’s YouTube Channel, as well as in the “Solo Art Series” archive.

Judi Lapsley Miller is a photo artist who is inspired by the wildlife and land of Aotearoa-New Zealand.  Judi will be promoted by the gallery with an extensive public relations campaign, provided by Kjprnews.com. They will promote and circulate her winning press release to over 1000+ News Outlets, Premium FOX, CBS, NBC, CW Affiliated Sites, 500 TV & Radio Sites, 250 Regional & Industry Site through Kjprnews.com and through LST gallery’s broad social media network.

In addition, as part of her award package, she will now be featured as an Artsy.net Light Space & Time promoted artist.   The LST Artsy.net page will feature 4 pieces of the artist’s art, a small artist statement and their website URL’s as part of the gallery’s overall prize package.

The solo art exhibition will also be promoted on artweek.com. Artweek produces 800,000 page impressions per month, 280,000 website visitors per month and has 30,000 newsletter subscribers.

Judi will also be featured on the gallery’s YouTube Channel and with an event postcard.

Below is Judi’s Artist Biography, her Artist Statement, along with 15 pieces of her photo art.  We hope that you will take the time to read Judi’s information and to take a look at her incredible beloved and endangered kākā parrots.

Judi Lapsley Miller’s art is inspired by the wildlife and land of Aotearoa-New Zealand, the awesome forces that went into making them (and continue to make them), and the tensions between the pre-human and modern world. She strives through her art to advocate for endangered species and spaces by exploring themes like the tenacity of life in the face of environmental destruction, what it means to be endangered, and the post-human world. Many of her images are inspired from her experiences with volunteering in wildlife conservation projects, especially with her beloved endangered kākā parrots.

Photography is just the first step in Judi’s creative process – she digitally blends and masks layers of photographs, graphics, scanned ephemera and textures, lighting and colour adjustments, and digital brushstrokes to form an image that is more painting than photograph. Photo artistry and digital compositing gives her the freedom to expand her viewpoint and delve deep into her imagination. She came to photo artistry by chance, having become frustrated with the limits and rigid rules of wildlife photography that precluded her from telling the intimate stories she could see unfolding around her. After attending a compositing workshop by Shona Jaray, she stumbled upon Sebastian Michael’s online photo-artistic training courses, and completed the year-long professional photo artistry training course “AWAKE” in 2016. She is currently in Michael’s advanced “KAIZEN” group, is an active member of the Artists Down Under – Australia & New Zealand group, and is a member artist of the New Zealand Academy of Fine Arts. She is inspired by (and has done many online courses with) the imaginative and surrealist photo artists Julieanne Kost and Brooke Shaden.

In her images, Judi exposes her interpretation of the inner world of others – their thoughts and feelings, their hopes and desires – in a form tangible to the human viewer that she hopes engenders empathy and understanding with other living creatures.

Judi and her photo artistic work has appeared in the Australian Photography magazine, the Independent Herald newspaper, Living the Photo Artistic Life magazine (multiple issues), and Artists Down Under magazine (multiple issues). Over the last year, she has exhibited in seven group exhibitions and one solo exhibition in New Zealand. In the international arena, she has twice placed 2nd in the photography and digital media category and 4th and 5th in the overall category in Light Space & Time online gallery exhibitions. Her straight photography work is used widely for advocacy and education purposes, including for Zealandia Eco Sanctuary, Forest & Bird, NZ Birds Online, Wellington City Council, the Ornithological Society of NZ, and other wildlife and conservation organizations. She lives in Wellington, New Zealand.

Imagine a verdant valley overflowing with native birds and plants because they're protected from introduced predators; an oasis in a modern city; a chance to reconnect with what we've lost - and you get a glimpse of the Zealandia Vision – a community effort to restore a valley to a pre-human ecosystem. In Judi's recent works, she explores the Zealandia vision in three, related series.

For many years Judi has advocated for New Zealand's birds and other wildlife through writing and photography, and now art, and she is currently the volunteer convener for the "Storyteller" and ex-convener of the "Kākā nest box monitoring" teams at Zealandia. Eleven images from the above series were recently exhibited in Judi’s first solo exhibition, fittingly held in the gallery at Zealandia Ecosanctuary, where sales directly supported Zealandia’s conservation work.

Judi’s motivations for taking wildlife photography to the extreme, somewhat surprisingly stems from her training as a professional scientist. From her background in experimental psychology and her volunteer conservation work, Judi reacts strongly to the long history of treating animals as soulless automata – an approach that has hindered our understanding of consciousness and cognition, and has led to wide scale animal cruelty over millennia. She considers careful application of anthropomorphizing to be vital to our understanding of animals as thinking, feeling, creatures. Animals may not think or emote exactly like humans, but anyone who has spent any time with an animal knows that they are conscious beings, worthy of our respect and understanding. Recent studies into animal cognition are showing no bounds in the depth of animal intelligence and awareness – the limitations of our understanding coming more from our own failings in connecting with an intelligence unlike our own.

In her images, Judi exposes her interpretation of the inner world of others – their thoughts and feelings, their hopes and desires – in a form tangible to the human viewer that she hopes engenders empathy and understanding with other living creatures. 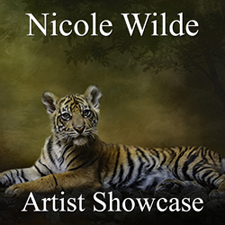 Light Space & Time Online Art Gallery is very pleased to announce that Nicole Wilde has been named as the Gallery’s new featured artist and she will now be promoted by the gallery for the next 14 days in the gallery’s Artist Showcase.

Nicole was selected as 1 of the top twelve finalists of the gallery’s recent Solo Art Exhibition Series #5. The placement in this competition qualified her art to be showcased in this feature.  Below are Nicole's Artist Biography, Artist Statement and 5 images that were submitted to this competition.

Nicole Wilde was born in Brooklyn, New York, but she always felt California’s siren call of freedom and creativity. In 1987 she moved to Los Angeles. From an early age Nicole had written poetry and short stories, followed by song lyrics, some of which were put to music for bands in which she played bass guitar. And yet, she still longed for a way to express her creativity in a visual form.

Possessing a “good eye” but lacking a good camera, she finally purchased her first DSLR in 2012. Knowing nothing about the craft—“I didn’t know an F stop from a bus stop!”—she began a driving, all-encompassing attempt at learning photography through books, online videos, and workshops. She expanded her knowledge of Photoshop in the same way and eventually combined the two disciplines, thereby finally finding her creative outlet in digital art.

Nicole’s other lifelong passion has been animals, particularly dogs and wolves. She co-ran a rescue sanctuary for wolves, and three of the residents ended up living with her for ten years until their passing. She became a professional dog trainer, wrote ten books on dog behavior, and taught seminars worldwide. It was inevitable that her love of animals would find its way into her art. Nicole’s images begin with one or more of her photographs taken in nature, zoos, or sanctuaries, and are then enhanced in Photoshop.

Animals. Nature. Emotion. Connection. These are the things that drive my passion to create art. My work is about the emotional life of animals, the interconnection of all beings, and the unseen magic that surrounds us all.

Each piece begins with one or more of my photographs. By applying equal parts Photoshop and imagination, bit by bit an image is transformed into a fantastical universe where a woman can cuddle up with a tiger; a boy can soar with the eagles; and an elephant can still feel the connection to his long-lost companion.

My hope is that my art touches the soul, stirs the emotions, and acts as a catalyst to reflect on the beauty and magic that is within us and around us.