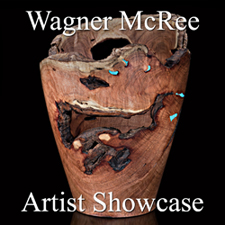 Light Space & Time Online Art Gallery is extremely pleased to announce that Wagner McRee has been named as the Gallery’s new featured artist and he will now be promoted by the gallery for the next 14 days in the gallery’s Artist Showcase.

Wagner McRee is a Texas turned wood artist.  Each of Wagner’s turned projects is a matter of discovery as the wood is refined and hidden characteristics are revealed. Wagner was selected as 1 of the top twelve finalists of the gallery’s recent Solo Art Exhibition Series #7. The placement in this competition qualified his art to be showcased in this feature.

Wagner’s Artist Showcase feature will be promoted to over 550+ News Outlets, Premium News Outlets (ABC, CBS, CW, Fox & NBC TV) & Radio Sites and inclusion on Google News & Bing News.  In addition, we will also be featuring and promoting his art in our various social media networks for further exposure.

Below are Wagner’s Artist Biography, Artist Statement and 5 images that were submitted to this competition.

Although he does not have the traditional background of the majority of artists in today’s world – his astounding work is that of a well-established professional.

He was born in 1991 in the city of Austin Texas, Wagner grew up on a ranch in Niederwald, Texas. Throughout his childhood, he practiced various forms of craftsmanship. At the age of fifteen, he took summer work welding structures for a construction company. At seventeen, he obtained his 6G pipe welding certification.

A resolute individual, he began his college career immediately following high school graduation. During his initial week of lectures, he was diagnosed with epilepsy. He continued his enrollment for two years while suffering from uncontrolled epilepsy.

The unyielding onslaught of seizures and lack of alternatives ultimately drove him to elect brain surgery. The operation was a failure. Six months later, during a bout of acute depression, a new medication was found that finally broke the indomitable grasp epilepsy had on his life.

For three years, he devoted himself to the nuclear engineering program at A&M. During a semester break, he reconnected with the wonders of craftsmanship and labor that had sculpted his life prior to college. At this point, he realized that it was time to make a change…

The rest is history…

In retrospect, the high-stress environment and lack of sleep that college demanded was a dominate factor regarding the frequency and severity of his epileptic attacks. Pursuing the life of an artist has allowed him to live an active life with relatively few restraints.

Mother Nature instills exciting and incredibly complex dynamics into her creations that cannot be improved upon or replicated by man. In the name of Her spirit - I seek to expose and emphasize the aspects of life that shaped each piece of salvaged wood throughout its existence as a living tree.

Each project is a matter of discovery as the wood is refined and hidden characteristics are revealed. The specific form utilized to present the piece is determined by these natural characteristics, I merely interpret the map that has been placed before me.