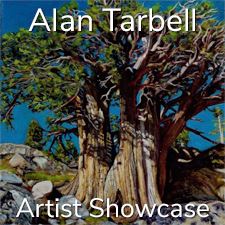 Light Space & Time Online Art Gallery is extremely pleased to announce that Alan Tarbell has been named as the Gallery’s new featured artist and he will now be promoted by the gallery for the next 14 days in the gallery’s Artist Showcase.

Alan is an award-winning artist based in Oakland, California, USA. He was selected as 1 of the top twelve finalists in the gallery’s 21st Solo Art Exhibition Series. The placement in this competition qualified his art to be showcased in this feature.

Alan’s Artist Showcase feature will be promoted to over 350+ major news outlets, with inclusion on Google News & Bing News. In addition, the gallery will also be featuring and promoting his artwork in the gallery’s various social media networks for further exposure.

Below are Alan’s Artist Biography and 5 images that were submitted to this competition.

Alan is inspired by nature’s infinite combinations of form, light, texture, atmosphere and rhythm. He finds richness in the weather and weathered objects, in the land and its layers, in the wind patterns, waves and great rock formations found on Earth. They seem to speak volumes on time, regenerate cyclically, all the while telling a profound story. His environmental pieces are a call to reflect on our vital and delicate relationship to the Earth and hopefully inspire its protection.

Through his painting practice Alan attempts to reveal vitality in his subject matter through dynamic color and movement. He often uses his camera to compose ideas upon which he translates them to canvas in a layered approach. The initial surface is textured and built upon with subsequent paint crusts, like the ancient sediments of the Earth. Here he allows the process to guide unique conversations between the evolving surfaces

These paintings of conifers are intimate portraits of trees from the wilds of California. My painting process starts with my camera, composing the tree amongst its environment, a stoic presence against the infinite sky. Texturizing the canvas mimics the immense layers found in the bark of these ancient trees. The painting is infused with memory of place, expressive brushwork radiating with color and rhythm juxtaposing movement with the seeming stillness of time. My intention is to portray a tree’s unique and persevering character, inspiring awe, and veneration. There is wisdom in the trees.

The resilience of these conifers can give hope to the challenges of our own survival. Especially during these very trying times: of sickness and desperation, of division and upheaval, of dramatic and catastrophic climate change. They have survived many fires and droughts over the millennia, which has helped to forge their character and growth. Fire is a great destroyer, but equally it is an essential element of renewal. May their majestic presence inspire us towards better days ahead, helping us to see the depth of the forest and ultimately becoming stewards for their future preservation.

California’s Native tribes have traditionally maintained the forests through periodic prescribed burns to enhance their productivity and facilitate passage. 5% of sales from these paintings will go to the Karuk Tribe’s Wildland Fire Program (

https://www.karuk.us/index.php/departments/natural-resources/eco-cultural-revitalization/wildland-fire-program) as they look to rebuild and promote eco-stewardship through integration of tribal wisdom practices. 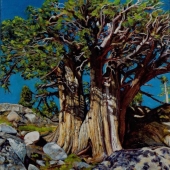 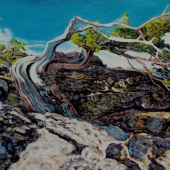 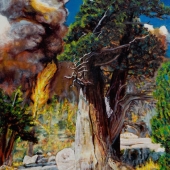 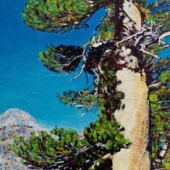 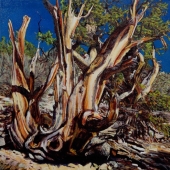