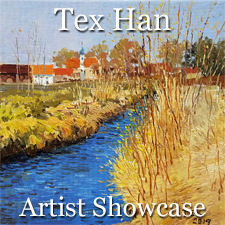 Light Space & Time Online Art Gallery is extremely pleased to announce that Shi-Ting “Tex” Han has been named as the Gallery’s new featured artist and he will now be promoted by the gallery for the next 14 days in the gallery’s Artist Showcase.

Tex is a Chinese landscape artist based in Manassas, Virginia. In his paintings, Tex combines impressionism and expressionism to form his own style. Tex was selected as 1 of the top twelve finalists in the gallery’s recent 12th Solo Art Exhibition Series. The placement in this competition qualified his art to be showcased in this feature.

Tex’s Artist Showcase feature will be promoted to over 350+ major news outlets, with inclusion on Google News & Bing News. In addition, the gallery will also be featuring and promoting his paintings in the gallery’s various social media networks for further exposure.

Below are Tex’s Artist Biography, Artist Statement and 5 images that were submitted to this competition.

Shi-Ting (‘Tex’) Han is a native of Shandong, China with a lifelong dream of becoming a professional artist. He earned a master’s degree in art from Shantou University, and has worked as a college art professor.  Since he came to the United States in 2013, he has continued to pursue his artistic career. In his paintings, Tex combines impressionism and expressionism to form his own style. His work also contains elements and influences of Chinese. Tex believes that through painting, an artist can do the things that a camera cannot. He loves the beauty of nature and he believes that God is the greatest artist, so the landscape became his primary subject. Tex is influenced by such Masters as Monet, Corot, and Van Gogh, and their influence can be seen in his works.

I have always been interested in Art. As a child, I would draw everything I saw. While attending university I studied Comprehensive Material Painting. I then pursued a Master’s Degree, which I received in 2008. During this period, my interest was Art Creative Direction. I studied how different artists built up their own styles. For the next 7 years, during a postgraduate study period, I determined that, with the rise of photography, Fine Art was going away from realism. However, my love of painting has kept me committed to my craft. I firmly believe there is something that a camera cannot catch, for example, our feeling, emotion, or understanding towards a particular subject. Therefore, in the future, I plan continue pursuing painting and also plan to focus on creating nonobjective art, where There there are no barriers of materials/time/space etc.

Tex's art can be seen on his Facebook Page.