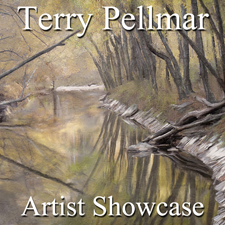 Light Space & Time Online Art Gallery is very pleased to announce that photographer Terry Pellmar is the Gallery's new featured artist and she will now be promoted by the gallery for the next 30 days.

Terry Pellmar is an award-winning, Maryland-based digital artist. Her artistic intent is to evoke a feeling, a mood, or a memory that draws the viewer into the image and makes them want to stay for a while. Her subject matter is varied; it can be any scene that moves her. Most often, however, a sense of tranquility inspires her work.

Terry started out as a photographer but put her artistic endeavors on hold until her retirement from a career in science. In the interim, photography had gone digital. Captivated by the software tools that allowed her to alter the reality of a photo, Terry immersed herself in digital art. While self-taught in digital techniques, she reached out to local artists to learn traditional artistic media in an effort to expand her toolset.

With digital paint brushes, filters, and textures Terry transforms reality to reveal her vision. Textures are omnipresent in her digital artwork. She makes her own and modifies them as necessary to suit her needs. She says “I use textures to enhance the mood of a picture. Used with subtlety, they can provide ambiance and depth. They can also be used to create drama, changing the colors, lighting, and focus of an image.” Moving the artwork from digital pixels to a printed image is part of her creative process. Terry experiments with traditional and non-traditional surfaces to produce unusual effects. Recently she has been using acrylic skins to adhere images to a surface that will not feed through her printer. These approaches provide an additional dimension to her work. Once printed, she often enhances the image with acrylic paint and/or pastels to create a mixed-media piece. Her work is continually evolving as she learns new techniques and tries new approaches.

Terry’s artwork is on display in a number of venues in the Washington DC metropolitan area. She has been invited to display in juried shows including Washington Artworks, Kentlands Mansion, and Laurel Art Guild. In addition, she has had many solo and group exhibitions. As a member of the Montgomery Art Association, her work regularly hangs at the MAA Gallery in Wheaton Westfield Mall.