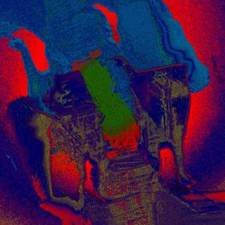 ‘It’s exciting to be here, and to be surrounded by such varied and interesting art-works,’ Sultana said. The event attracts about 10,000 visitors in just 4 days. Galleries from around the world are exhibiting their artists.  ‘It’s inspiring to meet and greet artists from around the world. The visitors seem to be just as cosmopolitan,’ Sultana added.

Her artwork, “Fallen Angels”, portrays a subject that is relevant to everyone living on Planet Earth today: ecology. A topic that artists have been encouraged to explore at Art Monaco ‘14.  While “Fallen Angels” is open to various interpretations, it reflects issues concerning the very earth that we all take for granted,’ she explained.

Fallen Angel from the ‘Dispersion’ series shows two figures who are dispersing, as they are falling towards a vortex. This vortex seems to be made up of dark reds and blues. Red is associated with hell in Western thinking. Perhaps these figures are spiraling towards ‘hell.’ As forests are depleted, will our earth turn into a nightmarish landscape with an ever-shrinking supply of organic materials necessary for human sustenance, including food, water and oxygen?

Another of Sultana’s art-work, Understanding the Universe is on display as well. As the name implies, it’s cosmic in scope, about trying to understand the building blocks of the universe with our binary left brain/right brain approach. Will human beings ever succeed in understanding the universe? If so, will they end up having deeper insights into themselves as well?

Art Monaco ‘14 will present recognized and established galleries as well as emerging ones from all regions around the globe and will be able to expose and sell their art in a sumptuous setting. The occasion will allow the forthcoming of all individuals to gather around in a social hub with some of the most influential and renowned individuals of our time.  With over 4000 art pieces being exposed for exhibition and sale, it’s an opportunity not to miss for those eager to purchase or sale some of the most remarkable art collections around the world or simply to allow yourself to get taken aback by one of a kind inspirational creations.  http://en.comemonaco.com

Of Indian origin, Sultana Raza has been living in Europe for many years. While she has an MA in English Literature, she is mainly a self-taught artist. Having received many awards, she has taken part in numerous group exhibitions in Europe and the USA.  http://sultanaraza.com/about 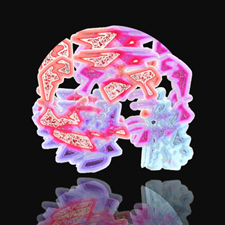 NEW YORK CITY, NY – April 1, 2014 - / Sultana Raza is very pleased to announce that she will be exhibiting her art at Art Expo New York 2014.  An award-winning artist, Sultana Raza’s works will be located at the Basak Malone Booth # 411.

Sultana states this about the event, ‘I’m excited about the prospect of exhibiting at Art Expo NY, and seeing my skulls next to that of Andy Warhol’s skull. I wonder what they’ll say during their tete-a-tete. So many things have changed since Andy Warhol’s times. My skulls have technology integrated in them, and are from my series HumanTechHybrid. Is that the way we’ll all go in the future. If so, just how human will we remain?”

Sultana Raza works include photography, digital art, and mixed media. She has worked on many series which deal with questions about evolutions in society cosmic, as well as, the bigger cosmic picture.

Sultana further discusses her art, “The unusual has always attracted me, whether it’s conceptual, ephemeral or unquantifiable in nature. Studies on time, karma, the cosmos, archaeo-astronomy, or perception, as well as current issues such as the impact of technology, or melding cultures crop up in my work,”

For thirty-five years and counting, Artexpo has been changing the way people buy and sell art. Their annual, juried expo brings the biggest publishers, galleries and collectors face to face with hundreds of established and emerging artists.

Sultana Raza’s art-works have been exhibited in many countries in Europe, and the USA. She will be participating in Art Monaco from 24 to 27 April 2014 as well. She is also the author of numerous poems, short stories, and articles (on art, films, and social, and humanitarian issues) whose works have been published in Canada, the USA, the UK, Luxembourg, North Africa, and India in English and French.  http://sultanaraza.com