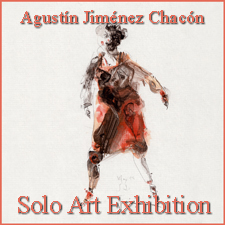 Light Space & Time Online Art Gallery is very pleased to announce that Agustín Jiménez Chacón has been selected as one of the four artists of the gallery’s forth “Solo Art Series” Art Competition.  Agustín will now have a month long solo art exhibition and he will be featured on the gallery’s front page, in the Gallery’s YouTube Channel, as well as in the “Solo Art Series” archive.

Agustín Jiménez Chacón lives in the city of Santiago de Cuba, Republic of Cuba. He was born in 1983 in the same city.  The sketches that he has provided for the Solo Art Series are his “Characters” series, "Those figures with undefined faces and bodies".

Below is Agustín’s Artist’s Biography, his Artist’s Statement, along with 20 of Agustín’s sketches.  We hope that you will take the time to read Agustín’s information and to take a look at the “Characters” series.

Agustín Jiménez Chacón lives and creates in the city of Santiago de Cuba, Republic of Cuba. He was born in 1983 in the same city.

Agustín’s father, a doctor, personally made illustrations for his book of surgery without any assistance from a professional illustrator. His father had the gift of the visual arts which he inherited from his father. Agustín believes that his parents gave him his aptitude and passion for art.

Agustín describes his artistic journey, “Since childhood I found a refuge in drawing. I had the need to translate my environment into lines and colors. To me, this was something very liberating and relaxing. I also turned to the school books in small galleries full of characters until I began to participate in painting competitions at the request from the Principal of my school. Since that time, the art world came to me empirically until I devoted myself to study its methodology before taking the entrance examination to the Academy of Fine Arts of Santiago de Cuba.”

Agustín’s Professor of Spanish Literature at his High School was responsible for sowing in him the vision of the arts as a profession and as a way to go for life, beyond a mere hobby. She organized a school magazine in which he was one of the magazine’s illustrators.

He studied Graphic Design, Illustration and Engraving Techniques at the Academy of Fine Art "José Joaquín Tejada" (1998-2002) which was located in Santiago de Cuba.

Agustín worked for over two years (2003-2004) at the Design and Fine Arts Center of Santiago de Cuba, as member of the Gallery's Assembling Team. Later, he became part of the Graphic Art Department of the Academy of Fine Art "José Joaquín Tejada" as Professor of Engraving techniques during four courses (2005-2009).

His work has been exhibited in galleries throughout his country. His art has also been shown in many group exhibitions in Cuba and also in different countries as well.

Agustín discusses his current state of creativity, “Right now I am in a very imaginative stage that impels me to take challenges. I have worked for a long time in small and medium formats using the industrial and manufactured paper in the support of my artworks. I feel that it is now time to give greater dimensions to my Characters. My immediate goal is to begin working in a large format, thus bringing my art to another level.”

The primary lines and the sketch´s spirit are the fundamental tracks in where my recent production has found a sincere skin to dress. I have been always fascinated by those drawings that not only bring life to one idea but also feed it, and you can find it easily below the best masterpieces in any page of any art book, no matter the creator.

For many artists and many people who love art the sketch is just a step, a tool in the creation path, a nobody land between the conception and the realization of a piece, but for me is more than that, it is, an Universe of evocations.

So, in these days the only strategy to follow has been to be sit in parks around downtown (Santiago de Cuba) capturing people through my pencils, which I enjoy the most since my Academy exercises, and complete them with colors through mixed media.

Once my nervous hand begins to leave graphite traces on the papers, a couple of ladies waiting for the bus, or a peanut seller are no longer what they are to become in what I would call “Characters”, those figures with undefined faces and bodies.