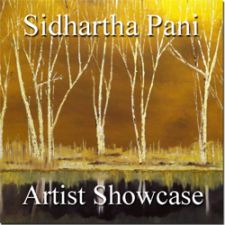 Light Space & Time Online Art Gallery is very pleased to announce that Massachusetts’ Artist s the gallery’s newest featured artist.  Sidhartha will now be showcased and promoted on the gallery for the next 30 days.

Sidhartha’s foray into art began in the summer of his 16th year when a chance meeting with a fine art student led to his acquaintance with the magic of the palette knife.  He had dabbled briefly in art earlier with stray awards at school, but it was the canvas he painted that summer with bold knife strokes that ignited a passion that would flare briefly for a few years, before becoming quiescent through years of training and practicing as a physician and rearing a family.

Five years ago, Sidhartha became an empty nester, and art beckoned again when his wife presented him with a course of classes at the Museum of Fine Arts in Boston.   Since then, he has been unstoppable. He has painted with a hunger and a passion that defies logic.  This has led to more than 120 completed canvases in this time despite a busy practice, and many awards.

Sidhartha’s paintings are usually improvisations from photographs. If a scene catches his attention when he is driving, walking or biking, he stops and takes a picture. He then mounts a blank canvas on his easel and plays mentally with colors, the subject and his perception until he has a rough mental picture of how the painting should look. As he starts working on the canvas, he constantly modifies the colors, adds and deletes objects and plays with shadows until he is done. The finished product usually has a contemporary yet impressionistic flavor.

Sidhartha’s paintings have heavy brush strokes and interesting texture. He plays with texture using the palette knife, the instrument that so captured his soul when he was a teenager. He applies thick coats of paint barely using any thinner. Tension dissipates as he moves from the top to the bottom of the canvas with swift and alternating vertical and horizontal strokes of the knife. He typically complete the main body of a composition by the end of the day.  Sidhartha likes to avoid clutter within a painting. He feels his work should be vibrant, yet soothing. It should be the perfect alignment of colors, composition, beauty and poetry that seduces the viewer into yearning for more. Although he did not set out to be an impressionistic artist, as his portfolio has evolved, people have commented on its impressionistic flavor. While not intended, the style is indeed appealing.

Sidhartha has now received many awards, and has been selected to participate in several juried shows. He recently had a large solo exhibition in India that was extremely well received. He has been commissioned for paintings for private homes, calendars, magazines and invitation cards. After completing the series of abstract landscapes exhibited here, he is currently working on portraiture with a contemporary flavor.

Painting has given Sidhartha confidence and a new meaning in life. He has evolved greatly since he re-started painting five years ago. Appreciation at shows and through awards has added to his joy, even while he acknowledges that he is seldom completely satisfied with his paintings.  Besides relieving stress and being a unique expression of his inner self and creativity, art has allowed Sidhartha’s soul to take flight.

In the years to come, he hopes to inspire others to re-awaken their dormant passion and talent, pick up the brush or the palette knife, and add joy to their lives and that of others around them.  His website is http://sidharthapani.com