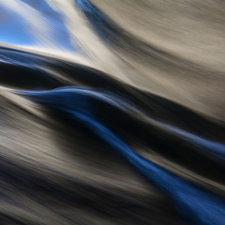 BLAIRSTOWN, NJ, January 3, 2018/  - The Romano Gallery at Blair Academy will present Danielle Austen, an award-winning fine art photographer specializing in intimate portraits of the environment, on January 8 – February 3, 2018. The opening reception will be held at the Romano Gallery located in the Armstrong-Hipkins Center for the Arts at 7:00 PM.

“Art is everywhere, waiting to be revealed. If one takes the time to look, they begin to truly see amazing wonders.” Said Austen. The work reflects a desire to see what is often overlooked or even seen as inconsequential, and reveal it. This often involves discovering shifts in reality where the intent is to engage and challenge the viewer to see the endless possibilities.

Danielle received her BFA from Cornell University and worked as a graphic designer before attending the master’s program at the Syracuse University’s S.I. Newhouse School of Public Communications, in photojournalism.

Working for newspapers and magazines, her editorial work has been published locally, regionally and nationally, including “Life’s, The Year in Pictures.” Returning to her fine art roots, she has combined her skills and training and has participated in over four dozen national and international juried exhibits, two group shows and three solo exhibits.

Danielle has won awards both in her photojournalism and fine art work, including the past two years receiving honorable mentions in the International Photography Awards. In 2013, she was a national winner of Canon’s “Project Imaginat10n” photo competition with Director Ron Howard. Celebrity director, Biz Stone, the co-founder of Twitter, chose her winning image to help inspire his short film, “Evermore” which premiered October 2013 in NYC.

In August 2014, she was the co-creator and curator of the “NJ350 Elements” an outdoor exhibit at the historic Duke Farms in Hillsborough, NJ, In celebration of New Jersey’s 350th anniversary, this unique juried photography exhibit was created to represent the environment within the environment.

“I have always been drawn to nature, especially the mystical element of water. There is no life without water as it is the driving force of all nature. It is flexible yet unyielding and calming yet destructive. It evokes knowing emotions, positive and negative. With my series, Echoing Cascades, I have been investigating the movement of water and how it interacts and shapes its surroundings by exploring the interplay of light, patterns, and tones, and the abstract imagery it creates. The results can be surreal and even ethereal. I believe these images are pathways into an unexpected depth of the natural world.” Austen stated.

During the development of this photographic series Echoing Cascades Austen was struck by a correlation found between the color and black & white images she was creating. Pairing the vibrancy of color with the drama provided by the black and white elements, uncovers a dynamic facet to the images that she continues to explore.