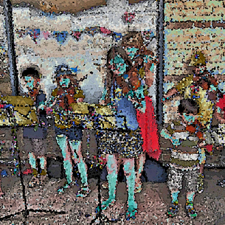 EAST FINCHLEY, LONDON, UK – March 20, 2016 - / Michael J Duke, an award winning photographer, has teamed up with the Phoenix Cinema in East Finchley to exhibit an artistic documentary of events in the Finchley area. Not being satisfied with what Michael calls the standard 2-dimensional photography, each image has been manipulated but not to the level of 'beyond recognition. This fits in with the nature of the Phoenix cinema which was built in 1910 and opened in 1912 as the East Finchley Picturedrome and has now achieved cult status.

The body of the exhibition covers life in the Finchley area from summer shows to open air music to the Olympic Torch going through Finchley before the start of the 2012 Olympic Games in London. A number of the images have appeared in various group exhibitions as Michael has tested reactions to the style that Michael has applied to the various sections that make up 'Project 1', a project that sees locations and themes get a treatment that goes out of standard photography to the realms of digital art and imagery.

The exhibition is a challenge to the viewer in a location that complements the attitude of the photographer in being independent, avoiding the cliché and gets conversations going. It is not the final word on the matter of artistic taste, but hopefully one of a planned series of showings that will get people discussing journalistic art and photography and its' role in the world of visual arts.  This event is from March 6th to April 3rd, 2016

Born in Northampton (UK) and brought up in London, Michael spent many years living in Israel. He has been on the photo-club scene since 2000 starting with the Tel Aviv Camera Club (2000 - 2006), and the Hampstead Photographic Society since 2005 and Isle of Wight Photographic Society since 2004. He has also had solo exhibitions in Tel Aviv and Holon (Israel) and London as well as being in numerous group exhibitions from Hampstead, Covent Garden, Warwick, Isle of Wight and Lublin (Poland). Michael has written a few articles on the subject of his photographic style and he is currently the editor of the Hampstead Photographic Society Newsletter.