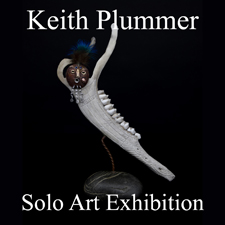 Light Space & Time Online Art Gallery is very pleased to announce that Keith Plummer has been selected as one of the four artists of the gallery’s fifth “Solo Art Series” Art Competition.  Keith will now have a month long solo art exhibition and he will be featured on the gallery’s front page, in the Gallery’s YouTube Channel, as well as in the “Solo Art Series” archive.

Keith Plummer is a Maine sculptor artist working primarily with metal and bone. Keith will be promoted by the gallery with an extensive public relations campaign, as well through the gallery’s broad social media network.  Also, part of his award package is that he is now featured as an Artsy.net Light Space & Time promoted artist.   In addition, he will be featured on the gallery’s YouTube channel and with an event postcard.

Below is Keith’s Artist Biography, his Artist Statement, along with 15 pieces of his mixed media creations.  We hope that you will take the time to read Keith’s information and to take a look at his creative and fascinating sculptor art.

Keith Plummer is a Maine sculptor working primarily with metal and bone. His mixed media creations combine the precision of metallurgy with an inventive transformation of bone into human form.

His art won an Award of Excellence in the Manhattan Arts International “New Beginnings” exhibition, 2016-2017, curated by Renée Phillips, who has described his art as “powerful and compelling”. He also won Third Place in the “Art of Humanity” art contest. His exhibitions include those at: Monmouth Museum, Lincroft, New Jersey; Abrazo Interno Gallery, New York, New York; and South Shore Art Center, Cohasset, Massachusetts; among others.

He has been included in Art Scope Magazine, The Woven Tale Press and Exquisite Arts Magazine.

I believe birth is a pathway to eternity. Bones remain the sole witness of a mortal existence and provide a narrative of our earthly life. My work shows that death is not morbid, but simply the end of growth; I strive to resurrect forgotten spirits and recover stories of those deceased. In my sculptures, bones have a voice and can speak for themselves.

I am as careful as I can be when working with natural material. Bones in particular are intricate and fragile, so I attempt stabilize and preserve them with little alteration. When working with metal, I use magnification to add as much detail as possible, showing depth from a distance. I use a variety of tools such as Dremels, dental tools, and bone saws. Some tools I’ve made myself, and some I’ve modified.

One day, on a visit to The Peary Macmillan Arctic Museum at Bowdoin College, I saw a display of Inuit sculpture. I was moved to know I was not alone in my fascination with this beautiful medium. Seeing the way Intuits honored the spirit world with the same medium confirmed what I had discovered for myself. It was like I’d been given divine permission to push forward with my vision. I hope to educate my audience about the elegance of bones and present them as a beautiful and renewable medium with sacred significance.

“Birth is a pathway to death. Bones remain sole witness of existence. My work honors death and celebrates life. I long to resurrect forgotten spirits and recover stories of those deceased. In my sculptures, bones have a voice; they can now forever speak for themselves”.