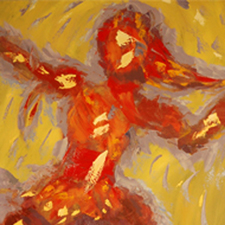 PORTLAND, OR – January 22, 2012 /- Portland Artist, Janet Madill is pleased to announce the February 2012 Opening and Artist Talk of her art installation, entitled "Traces of the Cosmos". Her installation will be displayed on the campus of the Warner Pacific College, in Portland, Oregon. This event will be held in College’s Community Room located on the second floor of Egtvedt Hall. “Traces of the Cosmos” is part of the College’s on-going storytelling series called, “Your Story Matters”.

Jan Madill’s artistic and vocational influences were the result of being born into a family with an artistic mother and a father who was a research chemist. A Northwest native at heart, Madill’s family migrated from Chicago to Shelton, Washington, which located near Olympia.

Jan states this about her “Traces of the Cosmos” exhibition, “this is my second universe-inspired series. The topic is clearly too large for one series! This series consists of 12 four by two foot oil paintings; four painted obelisks, two with surprises; two free-standing mirrors with curving space-time built in; and a four foot diameter ball painted with interconnected earth/universe themes...”

The public is invited to attend the Artist Talk on February 1st from 12:00 PM until 1:00 PM and the Opening on Friday, February 3rd from 6:00 PM until 9:00 PM .m. This art installation will be on display through February 22, 2012 at Warner Pacific’s Mount Tabor Campus, located at SE 68th Avenue and SE Division Street. For more information on this event http://www.warnerpacific.edu

Janet Madill received her undergraduate degree at Stanford and a M.Ed. from the University of Oregon and been in numerous solo and group exhibitions throughout the Northwest. A mother of two grown children, Madill now paints full-time and enjoys working collaboratively with her husband Bill on sculptural obelisks that will also be on display during this exhibit. The “Traces of the Cosmos” exhibit is free and open to the public. Find out more about Jan Madill’s art at her website http://www.jamimi.com.