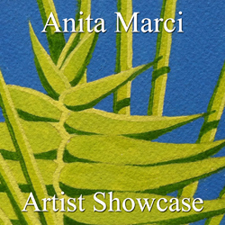 Light Space & Time Online Art Gallery is extremely pleased to announce that Anita Marci has been named as the Gallery’s new featured artist and she will now be promoted by the gallery for the next 14 days in the gallery’s Artist Showcase.

Anita Marci is a Hawaiian based painter.  Anita specializes in creating art which depicts Hawaiian wildlife and botanical plants.  Anita was selected as 1 of the top twelve finalists of the gallery’s recent Solo Art Exhibition Series #8. The placement in this competition qualified her paintings to be showcased in this feature.

Anita’s Artist Showcase feature will be promoted to over 350+ major news outlets, with inclusion on Google News & Bing News. In addition, the gallery will also be featuring and promoting her Artist Showcase Feature in their various social media networks for further exposure.

Below are Anita’s Artist Biography, Artist Statement and 5 images that were submitted to this competition.

In New York, in 1998, Anita Marci became a Fine Arts Instructor and an active art exhibitor showing her Award-Winning Watercolor paintings. By January 2003, when she relocated to Lahaina, Maui, Hawaii, she was a nationally known and respected Art Workshop Instructor. On Maui, she taught privately and at the Hui No'eau Art Center, the Art School at Kapalua, the Ritz-Carlton Kapalua, and the Maui Marriott- where she was the artist-in-residence. Her commission work soon flourished while exhibiting her fine art at four of Lahaina's top galleries.

Marci’s mission statement is to create beautiful Fine Art that enhances and unifies the environment to make a comfortable and inviting atmosphere. In 2007, her images landed a major commission of over twenty original paintings for ESPN Television Celebrity Chris Berman and his wife Katherine. These loyal collectors now own more than forty Marci originals in their three homes.

In 2010, Marci's Watercolors and Acrylics were featured in “Studios” which is a Special Annual Edition of the American Artist Magazine. In December 2012, Marci was a TV guest on “Life on Maui.” In 2013, 2014 and 2015, and 2016 twenty-five top galleries across the Nation awarded a total of ten American Art Awards to Marci. In 2016, Marci earned a First Place award, making her the best Floral Non-realistic artist in the world. Art Business News selected her as a Top Emerging Artist in 2014 and featured her in their International Magazine. This artist earned twenty International Art Awards in 2015 and most recently, in July of 2016, her “Three Umbrellas” painting won fifth place overall and third place in the painting category in the Light Space and Time Seasons competition. She enjoyed her position as Artist-in-Residence at the exclusive Ritz-Carlton, Kapalua and at the iconic Ka’anapali Beach Hotel in 2015 and 2016.

American Art Collector – Juried Competition of New Work has featured Marci’s art in their 2014, 2015, and 2016 publications. Marci's paintings are also included in the 2014 edition of International Contemporary Masters. Her work is represented in the 2015 edition of the Blink Art Resource Book. Art Business News magazine presented the artist in their Spring and Fall issues of 2014.

Anita Marci was accepted and exhibited as an individual artist at the prestigious Art Expo New York Show in April 2014. Artblend Gallery began representing Marci's acrylic on canvas paintings in June of 2014 in their Fort Lauderdale, Florida Gallery. In December of 2014, she exhibited her work in the dynamic Spectrum Miami show to great acclaim. In November of 2015, Anita showed in the Joshua Tree National Park Juried Exhibition at the 29 Palms Gallery. In 2017, her art was juried into and presented at the exciting Art Comes Alive Annual Exhibition hosted by Art Design Consultants in Cincinnati, Ohio.

The purity of expression is the constant objective of my art. I distill the essence of my subjects and portray them with as little detail as possible. Solid values are established out of gradations. The enhancement of contrast and separation of shapes is part of the complex and challenging editing process that informs my work. This leads me to an economy of form and a profusion of bold, smooth, color guiding the viewer to see ordinary objects in a streamlined, yet extraordinary way. I have a relationship with everything I paint, which provides the work with an authenticity of personal experience - the story behind the art. The intersection where representation meets abstraction intrigues me completely. My paintings express my fascination with visually consuming objects of usefulness and pleasure.