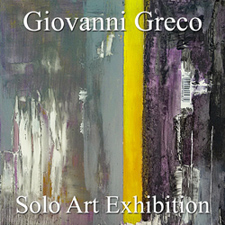 Light Space & Time Online Art Gallery is very pleased to announce that Giovanni Greco has been selected as one of the four artists of the gallery’s sixth “Solo Art Series” Art Competition.  Giovanni Greco will now have a month long solo art exhibition and he will be featured on the gallery’s front page, in the Gallery’s YouTube Channel, as well as in the “Solo Art Series” archive.

Giovanni Greco is an abstract painter from Catania, Italy.  Giovanni will be promoted by the gallery with an extensive public relations campaign, provided by Kjprnews.com. They will promote and circulate his winning press release to over 1000+ News Outlets, Premium FOX, CBS, NBC, CW Affiliated Sites, 500 TV & Radio Sites, 250 Regional & Industry Site through Kjprnews.com and through LST gallery’s broad social media network.

In addition, as part of his award package, he will now be featured as an Artsy.net Light Space & Time promoted artist.   The LST Artsy.net page will feature 4 pieces of the artist’s art, a small artist statement and their website URL’s as part of the gallery’s overall prize package.

Below is Giovanni’s Artist Biography, his Artist Statement, along with 15 pieces of his paintings.  We hope that you will take the time to read Giovanni’s information and to take a look at his wonderful and fascinating abstract paintings

Giovanni Greco lives and works in Catania, an Italian city on the east coast of Sicily.  This ancient Greek colony sits at the foot of Mount Etna and is rich in Baroque architecture. From his teens, Giovanni showed remarkable manual and artistic ability which deepened over the years with continuing research and study of painting techniques.

Giovanni began his artistic activity in Rome in the early '90s. After completing artistic and biologic studies, he attended the Naked School at the Academy Fine Art of Catania. A passion for sixteenth and seventeenth century art led Giovanni to focus his studies on the works of Caravaggio, Poussin and, above all the Flemings, van Eyck, Brueghel...

Giovanni works in his hometown as an assistant at art-cultural associations, galleries, and art studios, contributing to the realization of local exhibitions and commissions.  At the same time, to satisfy his classicist needs, he deals with Hellenic art, generally believing that aesthetic perfection as well as technique are key in completing the vast curiosity that leads him to intersect with contemporary painting in order to expand his Knowledge and find its inner dimension driven by greater reflection on life and trying to interpret sometimes "ineffable" thought as a way to put in new light the fundamental problems from which his mind does not cease to be released.

“After a period of figurative painting, I desired to analyze the nature of man and of things in another way to arrive at the synthesis of a more immediate reality where the gesture and the dream are the emotional content that determine passions, tensions and inconvenience. I adopted in my work a kind of psychoanalysis of form and color, eliminating the third dimension, accentuating emotional values in expressing feelings with the sign, where the means of expression are lines and the color textural relationships that the ‘eye can grasp in the surfaces of the objects, along the walls of the city, in the street poster where the posters have large tears or even fluttering edges, where the work itself is understood as a result of the meeting between man and nature in an empathy of pure form’.  The work’s complexity is intended to develop a discourse around structure and technique.