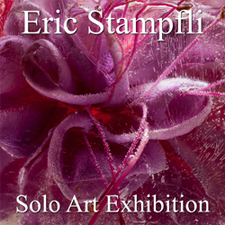 Light Space & Time Online Art Gallery is very pleased to announce that Eric Stampfli has been selected as one of the four artists of the gallery’s third “Solo Art Series” Art Competition.  Eric will now have a month-long solo art exhibition and he will be featured on the gallery’s front page, as well as in the “Solo Art Series” archive.

Eric Stampfli lives in the San Francisco Bay area of California, where he is an award-winning commercial photographer and educator.  Erik will be promoted by the gallery with an extensive public relations campaign, as well through the gallery’s broad social media network.  In addition, Eric will be featured on the gallery’s YouTube channel, with an event catalog and with an event postcard.

Below is Eric’s Artist’s Biography, his Artist’s Statement, along with 15 of Eric’s images.  We hope that you will take the time to read Eric’s information and to take a look at his series “Still” which explores the rich textural landscape of ice and life frozen beneath it.

Looking back to the moment that would define the course of my life. I can remember a cold morning camping high in the Sierra Nevada Mountains. It was there I turned to my father and asked, “Why don’t we ever bring a camera on these trips, why don’t we ever take pictures?” Looking eastward to the rising sun and the promise of a new day my father replied, “We could never capture an image that would do justice to the memory of this moment. A camera encompasses only one sense, close your eyes and feel the warmth of the sunlight on your face, listen to the crackle of the fire, the whoosh of the wind through the trees, smell the almost overpowering perfume of the evergreens, wood smoke, and the very earth, around you. These things are what makeup memory, not just what you see.” With that one statement, the gauntlet was thrown and I would spend the rest of my life proving my father wrong.

Living in the San Francisco Bay Area I am now a self-taught photographer, educator, and evangelist for all things creative. Staying true to what I saw as a challenge so many years ago I endeavor to make each photograph I take encompass more than just the visual. From food to rich textural still, life’s for advertising clients, to sports portraiture, and fine art imagery which is now hanging in a growing number of homes and businesses I judge each image by the number of senses I can involve. Attempting to tap into the very heart of memory, I’ve instilled in my imagery a depth that attempts to elevate this supposed purely visual medium into so very much more.

I began making photographs more as a necessity than any grand experiment in creating art. Going back as long as I can remember I have always seen pictures in my head. At first, ill-formed like the fragments of a dream that I'm trying to remember this medium became the tool that I used to give definition to and make real those images. This is how I learned photography. It wasn't about trying to capture a pretty sunset or portrait of a friend or the unfolding drama on a city street. It was alone in a studio learning to trust and ultimately reproduce the images I saw.

It was there, while learning my craft I discovered how to tell stories with my photographs and discovered that this medium is far from just a visual one. Like memory itself, a good photograph is so very much more than just the picture, if I am successful in incorporating the other senses the viewer can experience my work rather than just see it.