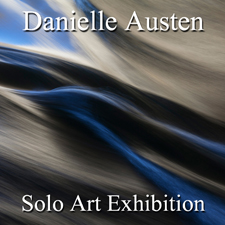 Danielle Austen lives in New Jersey, where she is an award-winning fine art photographer specializing in intimate portraits of the environment. Her work which will be featured in the “Solo Art Series” is “The Tidal Bridge” series which was a photographic study that she worked on while she was the artist-in-residence at Acadia National Park, Maine in 2015.

Below is Danielle’s Artist’s Biography, her Artist’s Statement, along with 25 of Danielle‘s images.  We hope that you will take the time to read Danielle’s information and to take a look at her wonderful ‘The Tidal Bridge’ series.

Danielle Austen is an award-winning fine art photographer specializing in intimate portraits of the environment.

Danielle received her BFA from Cornell University and worked as a graphic designer for seven years before attending the master’s program at the Syracuse University’s S.I. Newhouse School of Public Communications, in photojournalism.

Working for newspapers and magazines, her editorial work has been published locally, regionally and nationally, including “Life’s, The Year in Pictures.” Returning to her fine art roots, she has combined her skills and training and has participated in over three dozen national and international juried exhibits, two group shows and two solo exhibits. She was recently selected to have solo exhibit as part of the “NJ Emerging Artist Series” at the Monmouth Museum in March 2016.

This past year she was an Artist-in-Residence at the Great Smoky Mountains National Park and returned for a second time to Acadia National Park in the fall. She previously did other residencies at the Everglades National Park and the Vermont Studio Center where she received a full fellowship.

Danielle has won awards both in her photojournalism and fine art work. In 2013, Danielle was a national winner of Canon’s “Project Imaginat10n” photo competition with Director Ron Howard. Celebrity director, Biz Stone, the co-founder of Twitter, chose her winning image to help inspire his short film, “Evermore” which premiered October 2013 in NYC.

In August 2014, she was the co-creator and curator of the“NJ350 Elements” exhibit. In celebration of New Jersey’s 350th anniversary, this unique juried photography exhibit was created to represent the environment within the environment. Images of New Jersey’s nature and wildlife created by New Jersey photographers were printed on 40”x60” water-resistant satin fabric and displayed outdoors at the Duke Farms Environmental Center in Hillsborough, NJ.

We often get lost in the beauty of the majestic vistas, but I believe it is the elements that make up these scenics that are of the greatest value. My nature photography focuses on documenting intimate portraits and unexpected views of the landscape. As a documentary fine artist, I am bound to seek honesty in my subjects and to communicate the spirituality of the moment. I search for what many may see as ordinary and discover the extraordinary.

I have always been drawn to nature. As an outdoorswoman and an environmentalist, it is where I find my peace…specifically around the mystical element of water. There is no life without water…it is the driving force of all nature. There is nothing in the world more flexible and yielding then water. I have been investigating the movement of water through long exposures…exploring the interplay of light, patterns, and tones, and the abstract imagery it creates. The effects can be surreal, and even ethereal. I believe these images are pathways into an unexpected depth of the natural world.

‘The Tidal Bridge’ series was a photographic study that I worked on while I was the artist-in-residence at Acadia National Park in 2015. Each day I would cross over the bridge at Mosquito Harbor on the Schoodic Peninsula to reach my housing.

I took on the challenge of what I could create within this tunnel of water that flowed under the bridge, focusing purely on the power of the tides, which change 12 feet every 6 hours. The factors involved...the light, the time, the tide, the winds, location of where I stood, and the length of exposure I chose...and how those elements combined could create unique images...and tell a story. The images were not digitally manipulated...the textures, patterns, and colors are true.