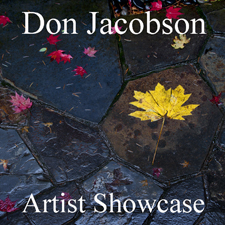 The world of photography and the world of the natural wonders of the Sierra Nevada opened to Don Jacobson simultaneously. The photographs he took with his little Kodak Brownie were woefully inadequate to express the grandeur of the Range of Light. Within a week of his first backpack trip into the high country, he bought his first SLR, a Pentax Spotmatic and began to take photography classes.

His degree is in electrical engineering and he worked in that field for three years. Working for the defense industry became more of a contradiction with his political views initiating a search for a desperately needed a creative outlet. For the next twenty-eight years, he worked as a glassblower. His work was shown in galleries across the United States, and the Corning Museum included a piece of his in their 1986 collection of 200 international glassblowers. Although glassblowing was his "day job," he continued to practice the art of photography, studying photography with Edmund Teske at UCLA for a year. The two different mediums are connected by light. The magic of glass is in its ability to transmit and reflect light while photography is the capturing of light.

His love of taking photographs of our beautiful native wildflowers contributed to his interest in botany. He led trips for the California Native Plant Society, the Native Plant Society of Oregon, Bark, Oregon Wild (formerly ONRC) and Portland Audubon. For sixteen seasons, he was a naturalist/guide for the Middle Mountain Foundation, leading hikes in the Sutter Buttes of the Sacramento Valley in California. "Beauty of the West," a book of his photographs was published in 2007, "Owner Decorated Vehicles" in 2009, "Alaska!" in 2010, "An Intimate View of Japan" in 2011 and "Pacific Northwest Architecture - A Photo Essay" in 2012.

Don states this about his art and photography, “I see the world differently now. The camera, which narrows the field of vision, has actually expanded my vision. When I realized I was viewing reality as if it were a series of photographs, I initially questioned that perspective. Now, I know my perception is enhanced and enriched from my pursuit of photography. An already dynamic and interesting world has become more so.”

He continues his thoughts, “I am delighted by the quality of light, the vibrancy of color, unexpected and often unnoticed detail. The stunning structure of an orchid, the intricate ornamentation on an older building, or dishes stacked in a dish drainer are fascinating to me. Abstractions and patterns are richer and invite investigation. My subject matter is limitless. Anything that appeals to my eye is fair game for my camera.”

Don’s work can be found at http://www.donjacobsonphoto.com