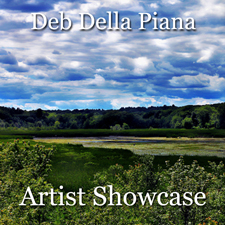 Light Space & Time Online Art Gallery is pleased to announce that Deb Della Piana is the gallery’s newest featured artist.  Deb is a Massachusetts based photographer and when she was in school she wanted to go to art school and learn how to paint. She remembers her mother telling her in no uncertain terms that people only earn money for their fine art after they die. After much indecision about what she really wanted to do to earn money, and not being interested in a four-year college, she went to secretarial school for two years.

After joining a Fortune 500 company as secretary to the Promotion Department in 1974, she decided that wasn't for her either. Determined to break out of the mold, Deb worked hard to move up the ladder and did so successfully. She remained at that company until 1997, the bulk of which were spent in various marketing services capacities (as a writer, account manager, and marketing services manager). In 1997, Deb unceremoniously ended her career in corporate America and started her own advertising and public relations firm.

Throughout her entire business career, Deb continued to paint, albeit sporadically. However, she had been taking photos since childhood and her love of art was eventually replaced by her love of photography. The first high-end camera she could afford to buy for herself was a Nikkormat FTN sometime in the early seventies.

As is commonly the case, life tends to get in the way of what one truly wants to do. And such is the case with Deb. While never having much interest in “studio” (or advertising) photography, she spent much of her business career supervising photography shoots. Along the way, there were a couple of children thrown in, and remaining gainfully employed was clearly a priority. However, Deb continued to take photographs for her own gratification, focusing on city life, people, nature, landscapes and the like. In 2001, the bottom fell out of her agency business, resulting in an unwanted three-year odyssey to the world known as homelessness with two small children.

It wasn't until sometime in 2012 that Deb started seriously thinking about pursuing photography. By then, she was out of the land of homelessness, in a new relationship with a wonderful woman (going from two children to four), and working at Starbucks. She continued to serve the masses until May of 2014 when, at the age of 60, Deb's partner encouraged her to pursue her photography.

Since the fall of 2014, Deb has held two self-funded solo photography shows and has been participating in local artist markets. She will participate in several over the summer of 2015 in the New England region. She has also been busy entering photography competitions, and has done well in several Light, Space & Time competitions too. She also won a Bronze medal in the Better Photography 2012 Photographer of the Year competition in the Nature category, and Honorable Mention in the Rachel Carson Photo Competition.

Deb maintains a busy photography blog at www.stoplookshoot.com. She plans to continue participating in competitions and local artist markets, while she puts together a strategy to make a gainful living at what she loves. Ideas include a third web site where businesses can lease or purchase photography for offices, and launching an out-of-the-box high school senior photo business. The goal here is to make enough money to pay the bills, while she continues to focus on the type of photography she loves best. Ultimately, she'd like to have a gallery.