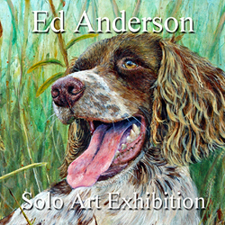 Ed Anderson lives in Strathmore, Alberta and he is an animal artist specializing in canine portraiture and African wildlife. Ed will be promoted by the gallery with an extensive public relations campaign and as well in their extensive social media network.  In addition, Ed will be featured on the gallery’s YouTube channel, with an event catalogue and with an event postcard.

Below is Ed’s Artist’s Biography, his Artist’s Statement, along with 15 of Ed’s paintings.  We hope that you will take the time to read Ed’s information and to take a look at his wonderful animal art.

Although born in the Canadian Maritimes and raised in Manitoba, Ed has spent all of his adult life in Alberta on the Canadian prairies. Ed’s early education was in science and he spent most of his working life as a geophysicist. Inspired by his artist mother, Ed also pursued a growing interest in art. Exploring the relationship between science and art and the role of creativity and design in each has been a motivating force in Ed’s art. Ed has been fortunate in receiving instruction and mentoring from several accomplished professional artists. With his technical career behind him, Ed now pursues art full time.

Growing up on a farm instilled a love of the outdoors and animals in Ed. His early interest in hunting led to an interest in hunting dogs and their relationship with their human partners. Ed has been involved with sporting dog field trials for many years, both as a competitor and as a judge. Hunting dogs of all breeds are a strong theme in Ed’s art. Ed has travelled extensively, both in his professional life and recreationally. He has hunted over and field trialled with sporting dogs all over the world and has developed an enduring fascination with the teamwork that exists between man and dog. Ed’s art is based on his own photographic reference acquired during his many travels.

Ed and his wife live with a German Shorthair Pointer and a very energetic English Springer Spaniel on their acreage near Strathmore, Alberta

Humans and dogs have had a close, symbiotic relationship for nearly as long as both have existed. Today’s sporting dogs trace their lineage in an unbroken line back to their earliest wolfish ancestors. Today we no longer hunt for survival and our success is no longer measured by the size of the bag. For the hunter, especially the bird hunter, success is measured in happy days afield and the joy of watching a beautiful and skilled bird dog performing a task it was born to do. If this is a joyous event for us, it is immeasurably more so for our canine partner, whose whole being is bent toward this task. He lives for it.

My art is an extension of my love for and dedication to dogs of the sporting breeds. In the hunting field, in field trials or at home, I find an unending source of subject matter from which to create art. I never tire of it. I create work in which those who feel as I do can see themselves. I create work for those who are unfamiliar with hunting dogs to gain a greater understanding of the collaborative role that exists between human and canine. Finally, I create to manifest and honour in art a relationship between two species driven to the same purpose.

I paint only subjects that I have personally experienced or witnessed, and I work from my own photographic record of those experiences. I travel thousands of miles a year seeking out opportunities to watch my subject matter in action. This is the fun part of the process and is the only way I can put something of myself in a painting. I work in both acrylic and oil, depending on the result I am striving for. If detail and accuracy is the goal then I usually use acrylic medium. If a more impressionistic, or painterly result is desired, oil paints are usually the answer. Before paint ever touches the canvas, I do a series of drawings in graphite of the subject matter. Occasionally I get carried away, and the graphite drawing becomes a final product in its own right.