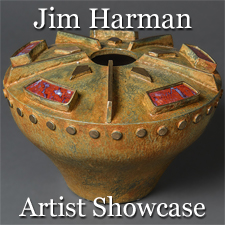 Light Space & Time Online Art Gallery is extremely pleased to announce that Jim Harman has been named as the Gallery’s new featured artist and he will now be promoted by the gallery for the next 14 days in the gallery’s Artist Showcase.

Jim is a sculptor and jeweler based in Oregon. For more than 30 years, Jim worked in the jewelry trade. As a lapidary artist, Jim cut stones for his jewelry designs and his bronze sculptures feature stones that he has cut.

Jim was selected as 1 of the top twelve finalists in the gallery’s recent Solo Art Exhibition Series #11. The placement in this competition qualified his art to be showcased in this feature.

Jim’s Artist Showcase feature will be promoted to over 350+ major news outlets, with inclusion on Google News & Bing News. In addition, the gallery will also be featuring and promoting her photography in the gallery’s various social media networks for further exposure.

Below are Jim’s Artist Biography, Artist Statement and 5 images that were submitted to this competition.

Jim grew up in southern California. He graduated from Long Beach State College, Long Beach California, in 1967 with a BA in fine art. Through the 70's, Jim continued to paint. During that time, Jim started cutting cabochons. A cabochon is a style of cutting semiprecious gem material and has a flat back and a domed top. Most often agates and jaspers are cabochons cuts. With a large collection of cabochons, it was time for Jim to learn how to make jewelry. With some help from other jewelers, the learning experience began.

In the early 80's, Jim took a number of classes at the Revere Academy of Jewelry Arts in San Francisco. For 30 years, Jim worked in the jewelry trade. Part of the process of creating custom jewelry included carving wax models to be cast by the lost wax casting process. The creation of wax models for jewelry and bronze sculpture are much the same. The transition was seamless. As a lapidary artist, Jim's bronze pieces showcase his stones.

I have two bodies of work. In my earlier work, the PRIMORDIAL RECOLLECTIONS series, I used animal bones for the foundation of my pieces. As animal bones have a sculptural quality on their own, I gave them a new identity. Not just bones. While these pieces are highly modified, they provide an opportunity to showcase the stones that I have cut.

My current focus is on bowls and vases. Most often, a vase has one hole and is the same on all sides. Expanding on that concept, I am making vases that have two sides. Each side has a different look. Some of my vases have multiple holes. Typically, my vases are about two inches thick, front to back. If you tire of looking at one side, you can turn it around. Two different looks in one vase.

Jim's art can be seen at the following websites: 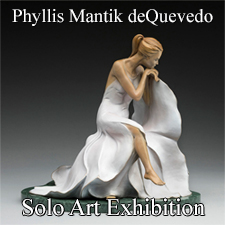 Light Space & Time Online Art Gallery is very pleased to announce that Phyllis Mantik deQuevedo has been selected as one of the four artists of the gallery’s recent 11th “Solo Art Series” Art Competition.  Phyllis will now have a month-long solo art exhibition and she will be featured on the gallery’s front page, in the Gallery’s YouTube Channel, as well as in the “Solo Art Series” archive.

Phyllis is an Oklahoma City, Oklahoma based sculptor. She works primarily in bronze and she chooses figurative and botanical subjects because of the fluidity of motion and range of expression. Phyllis will now be promoted by the gallery with an extensive public relations campaign.

In addition, as part of her award package, Phyllis will now be featured as a Light Space & Time – Artwork Archive promoted artist.

Phyllis’ art will also be featured on the gallery’s YouTube Channel and with an event postcard.

Below is Phyllis’ Artist Biography, her Artist Statement, along with 15 of her bronze sculptures.

The youngest of three girls, Phyllis Mantik deQuevedo was born in the small town of Wainright, Alberta, Canada. Her earliest memories are farm life and learning to skate on the neighborhood rink in their back yard. As she recalls, “We made most of the cold Canadian winters, but at the first signs of spring we would head out to the fields to collect crocuses as they poked their heads out from under the mounds of snow.” Phyllis spent endless hours lost in creative interests of sewing, crocheting and handicrafts. Other favorite activities revolved around the enjoyment of music, playing piano and singing in the choir. Farm life was hard though and did not offer future opportunities for her parents.

When Phyllis was six, the family moved to Edmonton. Her mother cleaned houses and her father worked as a carpenter. “My dad was creative in his own way; had he been given the opportunity he might have been an engineer or architect. He had a gift for numbers, and it seemed to me he could build anything,” she says, remembering the gift of a drawing table in Art College. “He was detail oriented and a fine craftsman.” The family moved frequently, if not far. In the 9th grade, Phyllis started another new school, and one that didn’t have a band class. So, she traded in music class for a sketchbook and pencils. It was a year of discovery as she experimented with drawing, painting, clay and welded metal. At year-end, her teacher encouraged her entry into a citywide contest. The prize of a bursary went towards further art education.

At 15, she attended an evening life-drawing class at the University of Alberta. “I’m appreciative of a teacher who worked with me, saw a talent and nurtured it,” she says. Preparing herself through high school, she determined to go to Art College. Phyllis graduated with a major in Visual Communications from the Alberta College of Art and Design (ACAD) in Calgary, Alberta. She moved to Oklahoma when she accepted a position as a Graphic Designer in Tulsa. Ten years into her professional art career, then living in Oklahoma City, Phyllis received her introduction to sculpture while working as an Art Director at a Public TV Network. She describes her fascination watching a sculptor on TV, “His portrait of the host was honest and exciting, and I loved the imprints he left in the clay.” She considered classes but they were costly and would have to wait. As good fortune would have it, within weeks, the sculptor approached the television network where Phyllis worked with an idea for a How to Sculpture Show. She was invited to take a series of classes and write the show proposal.

She quickly became enamored with clay and all its possibilities. “I had experimented with every kind of painting media, fabric arts and crafting, but soon every other type of media was set aside as I focused on becoming a sculptor.” Starting with fired clay and eventually moving to oil-based clay, she cast her first piece in bronze. “Since that time, I’ve been fortunate to sell numerous small sculptures and receive commissions to produce monumental works of art for private clients, churches and cities.” Phyllis’ technique has evolved over the years, as have the materials recognizing that water-based clay was limiting in the type of detail she could obtain in complex figurative works. Studying the figure continuously, with a variety of professional sculptors she continued to refine her art. “It wasn’t until a trip to Hawaii that I became fixated with the idea of sculpting flowers.” Flowers are full of color and vitality giving her opportunity to explore patina in ways she hasn’t previously.

Struggling with a significant change in subject matter, and how it might be perceived to her collectors, but unable to let it go, she settled upon the idea of merging the two interests. Phyllis deQuevedo chooses figurative and botanical subjects because of the fluidity of motion and range of expression. Her series, which focuses on figurative interpretations inspired by botanical shapes and human metaphors, is titled “Metaflors.” She cites many influences, but remembers most that of her mentor and friend Rosalind Cook. “She generously shared her knowledge, encouraging me to greater things. I left every encounter with her more inspired.” She also notes the work of artists such as Vala Ola and Richard MacDonald for their excellence in figurative anatomy and sensitivity. In studying other botanical sculptures, she came across the work of Stephen Robin. His sculptures have a bold and unexpected simplicity compared to what are typically delicate, fussy and highly detailed forms. “While his influence may not be directly evident in my own work, the realization of other possibilities of subject matter helped me to examine a new direction.”

Her first major art commission resulted from a call for entries for the Boston Avenue Methodist Church in Tulsa, OK. This beautiful church, on the National Registry of Historical Buildings, is recognized for its Art Deco ornamentation. Phyllis created a pair of 16-foot bas-relief panels for the church columbarium and a second monumental sculpture for the park adjacent to the church building. Other major works include a larger than life sculpture of Oklahoma writer and historian Angie Debo, for the Stillwater Oklahoma Public Library.

Phyllis and her husband Steve live in Oklahoma City where she maintains an in-home studio. Together, they enjoy traveling, which she feels gives her a deeper connection to the world around her. They take immense pleasure in the garden and the lessons learned from maintaining it throughout the year. Phyllis has been featured in several Oklahoma publications along with her monumental commissions. She is a 20-year member of the Oklahoma Sculpture Society (OSS) and a Master Member of Women Artists of the West (WAOW). She is an Associate Member of Women Artists of the West (AWA) and the National Sculpture Society (NSS). Phyllis is represented by Xanadu Gallery in Scottsdale, AZ.

I have always been fascinated with the inner being and the hidden forces that propel us through life. There is a story there and I am drawn to create art to tell that story. We are so much more than just skin and bones and our mirrored image; we are complex organisms full of emotion and intellect. We move, breathe, grow and change with time and in relation to our environment. In the scope of time, our presence is fleeting but each of us leaves an imprint of having been. It is this understanding that inspires me to sculpt human and botanical forms. Both subjects contribute a color and vibrancy and I am moved to capture and share those brief moments while I may.

I’m often asked about the process of creating a sculpture. Every sculpture goes through an awkward stage. There is an excitement and energy as I begin and a restlessness as it nears completion. But somewhere in the middle, I wrestle with an armature that isn’t working, anatomy that doesn’t feel natural or a composition that doesn’t flow. Experience tells me I must be brutal enough to fix it or honest enough to set it aside. Then there are those times when I am rewarded in a breakthrough moment in which a sculpture becomes more than I ever anticipated. This is what excites me to continue to hone my skills and push my personal boundaries.

My current work explores storytelling through metaphor. Instead of trying to sculpt figures and petals, whether realistic or abstract, I strive to sculpt what it feels like to be human and to convey the unspoken. The reward is in knowing that others can relate to them from their own human experiences. Phyllis can be reached via her email.