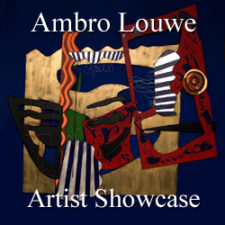 Light Space & Time Online Art Gallery is very pleased to announce that Ambro Louwe is the gallery's featured artist and he will now be featured in the Artist Showcase Section of the gallery.

Ambro Louwe was born in Beverwijk, a small suburb of Amsterdam in the Netherlands. As WWII had just ended and his father had chosen to be a music teacher, there was not much money. But there was the whole world, the library, paper and pencils. His father introduced Ambro into the classics of drawing and music. The old masters were his idols: Rembrandt. Da Vinci, Michelangelo, Mozart, Bach etc.

As Ambro entered Teacher's College, his horizons were broadened.  During his 35-year educational career, he became a headmaster of the Dutch School in Dubai, a teacher at a high school in mathematics, Dutch, history, drama, geography, art & craft, consultant in information technology for businesses such as Fokker Aircraft, tai chi and a teacher of state law for newly elected members of the city councils. In this way Ambro earned a living for his family. In his spare time he was passionately busy painting and creating sculptures. The urge of creating, to find new ways to explain or give form to his emotions drove him to explore and to discover.

Ambro explains his artistic journey, “Creating was not always enjoyable, as giving shape often leads along uncertainty and deep doubts. Stepping into the unknown is very demanding most of the time. It may also bring joy and happiness, a feeling of gratitude. Moreover, it gives amongst others, an understanding of, and admiration for the expressions by others. By giving shape and getting into a flow one heals and feels part of the world and connected to matter. It makes a person matter in this world.”

However it was only in Dubai that he started to paint more seriously. In the beginning Ambro had the feeling that he had to prove his unpolished talent. But along the way his creations became freer. And behind the increasingly flowing moves, the talent remained. Rousseau le Douanier, Mesdag, Manet, Rodin were his inspiration, changing to Pollock, Stella, Lucebert. And more recently the game and action of getting into the flow and searching for harmony in colours and shapes bring objects to life. Concentration and following the process in balancing the different parts. A dialogue with inner words, colour, shape that bring about surprising works. As if performing tai chi in a different way.

His works are owned by city councils, hospitals, schools, hotels and private persons in Holland, America, Dubai, Switzerland, France, England and Germany. On his website one can see the diversity of his artwork. www.ambrolouwe.com and www.ambro.org