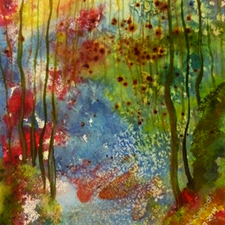 CORONA, CA – November 3, 2015– / Corona, California based artist Subodh Maheshwari is one of the latest recipients of the prestigious Bharat Gaurav award for art and culture in New Delhi, India. The Bharat Gaurav Award, which is now in its 38th year, has been awarded 40 people of Indian heritage and of various nationalities.

Awards are given to Indian people who promote the advancement of Indian arts and culture locally and abroad. As an American citizen, of Indian birth, Subodh often uses Mogul and Rajastani influences in her paintings as well as teaching Indian language and cuisine. Other recipients include influential doctors, politicians, philanthropists and actors representing India. Approximately 1600 people applied to be selected for this award, which only had 40 recipients this year.

When asked how she felt about receiving the award Subodh remarks, “I am deeply honored and humbled to receive this award. My cultural heritage is a very strong influence on every aspect of my life and I want to share it with people around the world.”

was born in India and earned her Master’s in Fine Arts at the University of California, Irvine where she won the prestigious Regional Fellowship Award. Since that time Subodh has participated in many national and international shows.

“Subodh is a contemporary master who bathes her artwork in glistening pools of saturated hues, capturing the ethereal beauty and timeless vitality of the world.” – Amsterdam Whitney Gallery, Chelsea, New York City, NY. Her artwork is accented by Hindi and Sanskrit passages is a fusion of eastern symbolism and western composition influenced by Rajasthani and Mogul art.

Her works have been described as emotional, mysterious, personal and humorous. Her website is http://subodhstudio.com