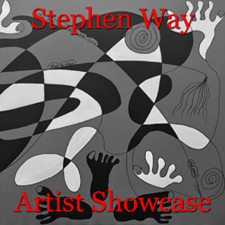 Light Space & Time Online Art Gallery is very pleased to announce that Stephen Way has been named as the Gallery’s new featured artist and he will now be promoted by the gallery for the next 14 days in the gallery’s Artist Showcase.

Stephen Way is a Bondi, Australia based artist.  Steve creates drawings which reflects the fluid study of Tai Chi.  Steve was selected as 1 of the top twelve finalists of the gallery’s recent Solo Art Exhibition Series #9. The placement in this competition qualified his artworks to be showcased in this feature.

Stephen’s Artist Showcase feature will be promoted to over 350+ major news outlets, with inclusion on Google News & Bing News. In addition, the gallery will also be featuring and promoting art in the gallery’s various social media networks for further exposure.

Below are Stephen’s Artist Biography, Artist Statement and 5 images that were submitted to this competition.

Steve lives in Bondi with the beautiful Karen and has two adult children. Mid-career as a physiotherapist Steve decided to take up life drawing as something to do (as he called it) and was immediately hooked. He met other artists and was attending class almost daily. It was a surprise to Steve that other artists suggested he submit a portfolio for entry to the National Art School.

He gained entry and regards his 3 years there as time well spent.

In the final year in open competition among fellow students Steve was granted 2 commissions for large scale paintings for a major re-development project at Darling Harbour Sydney. This came as quite a boost for Steve but work and family commitments eventually prevailed. No art work was produced in a hiatus of about 16 years.

Steve now has time to devote fully to his art. Recently he has discarded a lot of old works, revamped others to hopefully better and stronger, and has commenced 2 separate bodies of work.

His best is on the horizon. Steve was offered a Solo show in a Melbourne commercial gallery for earlier in 2018 and unfortunately had to decline due to timing and logistical issues. An Online show is arranged for later in 2018.

Presented here are 10 paintings on canvas and 10 drawings on paper. All are black and white and mostly mixed media. They are an attempt to visually depict the script, movement and 128 postures in the 7 cycles and circular nature of Yang Style Tai Chi.

This style is soft, slow, continuous, centripetal in effect, meditative and yet very powerful. It is performed left to right and right to left and takes about 35 mins to practice each side.

In what has turned out to be a rather difficult self-assessment, I am somewhat surprised to discover the surreal and abstract quality displayed. This is possibly due to initially drawing directly onto the canvas with a permanent marker ink pen, leaving no real room for error.   A kind of go with the flow effect. Stephen's website is www.gallery247.com.au/stephen-way