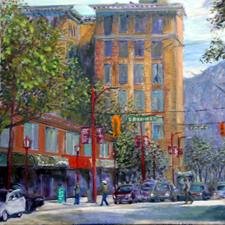 CHILLIWACK, BC, CANADA – January 20, 2012 / - Canadian artist Stephen Dobson is pleased to announce that his art show “Reflections of BC’s West Coast” will run through February 23, 2012 at the Chilliwack Museum in the Chambers Gallery, located in the city of Chilliwack, BC.

Stephen is a self-taught artist who resides in Mission, BC. Stephen states that “I can always find something fresh to paint in the beautiful Fraser Valley.” He was originally born in Manchester, UK and is a prolific artist who developed a signature style early in his career. He now works primarily in oil paint. When he is painting, he strives to find light and color with confident brush-work, employing both pallet knives and his fingers to paint.

Stephen always tries to express his feelings in his paintings and states that “I hope to bring the observer of my artwork closer to my thoughts about the surrounding landscapes, the people and the different things that I observe in daily life and especially in the way people interact with their surroundings.”

Stephen was invited to join the Stave Falls Artist Group, becoming one of the original founding members. In 2010 and 2011 he had all of his submitted artworks recognized by the American Art Awards. Because of this achievement, he was awarded a number of 1st, 3rd and 5th places, in a variety of different categories. The American Art Awards is an art competition that is open to all artists from around the world and is juried by a group of 25 well-respected art galleries from across the United States.

Stephen’s original paintings can be viewed in his home studio located in Mission, British Columbia. Also, his artwork is held in a number of private collections throughout Canada, the United States and in Europe. His website can be found at http://stephendobson.com