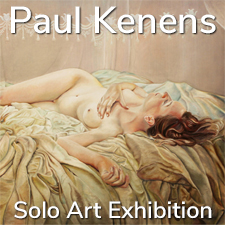 Light Space & Time Online Art Gallery is very pleased to announce that Paul Kenens has been selected as one of the four artists of the gallery’s recent 16th “Solo Art Series” Art Competition.  Paul Kenens will now have a month-long solo art exhibition and he will be featured on the gallery’s front page, in the Gallery’s YouTube Channel, as well as in the “Solo Art Series” archive.

Paul Kenens is an award-winning artist based in the Belgium. Paul will now be promoted by the gallery with an extensive public relations campaign.

In addition, as part of his award package, Paul will now be featured as a Light Space & Time – Artwork Archive promoted artist.

Paul’s art will also be featured on the gallery’s YouTube Channel and with an event postcard.

The “Solo Art Series” is a series of monthly solo art exhibitions for established artists who have a body of work to present to the public.  Artist participants were asked to submit the following 3 components for the “Solo Art Series” competition: 1. Their art.  2. Their artist biography.  3.  Their artist statement.  These elements were evaluated and judged, which resulted in the selection of the artists who will be featured in individual month-long solo art exhibitions.  This was the 16th “Solo Art Series” Art Competition that the gallery has conducted.

Below are Paul’s Artist Biography, his Artist Statement, along with 25 of his images.  We hope that you will take the time to read Paul’s information and to take a look at his artwork.

Paul Kenens was born in Brussels (1947) as the eldest of six children, a childhood without a father. The lack of money soon forced us to be self-sufficient. As a 14-year-old and the family's breadwinner, he found work in a printing company. Worked up to a color mixer and offset printer for luxury printing, which was still a specialized craft at the time, he discovered his sense of composition and color.

Thirteen years later, he left the print shop for a year but never returned. He no longer wants to be dependent on third parties and starts acting. In the same period, he discovered the ceramic craft. Paul Kenens is passionate about these two disciplines, which has resulted in two parallel careers. As an independent actor in film, TV and theater, he made international theater independently. As a ceramist, he specialized in color glazes, designed decorations and tile panels, copied old Art Nouveaux panels, made ceramic architectural ceramics for protected monuments and carried out artistic ceramic commissions for other artists. Paul Kenens always immersed himself in the subject matter, searched for the core of the craft and its characteristics and followed his own path in it.

In 2010, he decided to paint and enrolls in the academy. Unaware of the gift or experience gained in painting with ceramic glazes, the final color of which cannot be seen immediately oil painting is a revelation: "I now see immediately now that I do," he says

He sells the ceramics studio, stops acting and throws himself completely into painting. In the academy, he quickly gets the name of an outsider for the passion and the use of a detailed painting style. He commutes daily between academy and his own studio. In between, he takes a Master class with the Brazilian Hyperrealist Omar Ortiz.

A retrospective exhibition is planned in Lier for 2021.

My subjects come from the immediate environment: it concerns people. If it is not myself, they are children or women where I notice in a split second a movement, an attitude or trait that arouses a thought that goes beyond the image (or goes against it). A personal detail that lingers in the memory. An image that establishes itself and grows in its emotionality (one has to fall in love with your subject, even if it is a banal thing like a child's toy or a piece of clothing).

My work regularly starts with photos of a fixed photo model; per photo session, I take a few hundred photos that are stored on a PC. They are viewed and reviewed several times, each time creating new thoughts. The images must "ripen". After that, various photos are edited, edited and adjusted until a certain image cannot be released. It is difficult to explain why a certain image is taking over. It probably has to do with the chaos in the head in determining the direction in which an image will be painted, the reminiscences that are attached to it and the intimate feelings that an image can generate. Multiple versions are made in an atmosphere of excitement. During the preparation, uncertainty about the future painted version flashes in all directions. The state of mind, the emotional attitude, determines the direction in which the image takes. Sometimes the image itself indicates a natural direction, or is this even the result of the interpreter's character?

I paint the underlay as detailed as possible, as if I want to finish the canvas. Then I repaint the entire painting, adjusting shapes and colors. I like saturated canvases without pasty painting. They bring depth to the color. Until the provisional end, I bring details, highlights and I emphatically paint over any points of attention.

Although the starting point is photo material, it is always a challenge to make a difference between photo-realism and painted image during the execution. Each painting is an attempt to increase the distance between the two and perhaps with the aim of painting beyond realism. With a painted image, you bring something else that you don't see on a photo (or virtual image). The whole of my work is not sterile but emotional; it shows what moves me. Over time, I view the painted canvas more critically and each time from a different state of mind or point of view, with corrections as a result. Sometimes an element is added months later that breaks the unambiguity or shifts the focus.

At the moment, I am working on a series with a fashion model. The softness, call it the sensuality, sometimes in contrast with the aggressiveness of folds in a fabric make me paint. The flexibility of the collaboration and the confidence to try things out sometimes create surprising and curious images.

Some works are poetic, sensual. Others arouse curiosity through the use of unexpected elements or unusual setting or combinations. My tittles sometimes raise questions; make the spectator think. In the painting, I try to bring an underlying, perhaps enigmatic reading, a space to give the viewer the opportunity to fill in their own interpretation, to ask an unanswerable question. In the end, it comes down to the fact that by making the choice I reveal part of the inner drive that the spectator reinterprets.