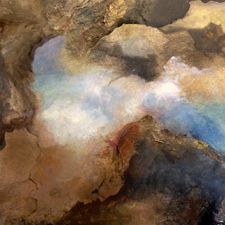 GARDNERVILLE, NV, February 21, 2012 / - Pam Brekas is proud to announce that her abstract paintings are being featured at the Sierra Arts Gallery in Reno, NV through March 16th in a combined show with Dayton, Nevada ceramicist Jack Taylor.

The public is invited to a reception 3-5 p.m. February 25, 2012 at the Sierra Arts Gallery, 17 South Virginia Street, Reno, NV. The name of the show is “Can You Imagine...” where the fundamental artistic elements of color, texture, and shape take on new life through an examination of the unconventional and the spontaneous. The two artists, practicing in different mediums find common ground in addressing their mediums from an alternative angle. For further information about the show and the artists see www.sierra-arts.org.

Brekas has created award winning art and photographs and shows her work locally as well as nationally and internationally through websites. In 2011 Looking Down on Splashing Water was showcased with 12 other artists in the Spirit of the Rogue show in Grants Pass, Oregon Wiseman gallery. This same piece recently received a third place in mixed media in a women's open show at LightSpaceTime.com gallery, where she has also been selected to be the featured artist starting April 15th 2012.

Pam has received over 170 awards and recognition and several solo shows in the past 10 years. This is her fourth show in Reno. She is a member of numerous art leagues in Nevada and California and active in the arts community. Locally, her work can be seen at the East Fork Gallery, the Brewery Arts Center in Carson City, NV and the Art Gallery in Markleeville, NV.

Brekas teaches abstract painting one and two-day workshops in her studio and at St. Mary's Art Center in Virginia Cit, Nevada. Contact her at pambrekas@gmail.com. Her website is www.pambrekas.com