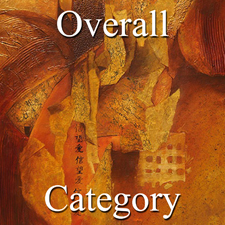 The Overall Winning Artists Category consists of the 10 Best Entries received from the 3 media categories of the Painting & Other Category, the Photography & Digital Category and 3Dimensional Art Category.

All winning artists will now be featured on the Light Space & Time website for the month of September 2015 and thereafter, the artworks and links to the artist’s websites will remain online in the Light Space & Time Archives. Congratulations to our artists who made our 5th Annual “Open” Art Exhibition so successful this month. At any time, we invite our winners and other interested visitors to link their websites to the Gallery’s archive page for further ongoing promotion.

The Light Space & Time Online Art Gallery will have digital “Open” Award Certificates, Award Ribbons, Event Postcard, Event Catalogue and Press Releases sent to you within the next week or so. Thank you for being part of the gallery. To return to the Open Home Page here.

Marti White is a mixed media artist from Tucson, Arizona. Her work is exhibited nationally and locally. Marti works in watercolor, acrylic, collage, assemblage and other mixed media.

Marti’s work is an expression of her inner self. She seldom plans her work but lets it evolve. Her work is sometimes representational, but often abstract. http://www.combymartiwhite.com.

Ron was born and raised in San Francisco and graduated from the University of California Berkeley with a BA in psychology and MBA in marketing. The son of a professional wedding and portrait photographer, Ron was literally raised with a camera in-hand from about age 6.

He borrowed his father’s medium format Rolleiflex as a young teenager and sometimes experimented with an old 4x5 view camera. At about age 15, his father gave him his first 35mm camera, which soon became his constant companion for street photography in San Francisco and the rock music scene of the late 60s and early 70s. His father signed him up for a workshop in Yosemite taught by the late Ansel Adams, and that broadened Ron’s understanding of light and Adams’ renowned use of filters and printing techniques to create dramatic landscape images.

As a high school student in San Francisco and a college student at UC Berkeley, Ron worked part-time at a noted professional photography store in San Francisco, meeting David Chan in his very early days of shooting for Playboy.

Ron’s passion for photography has never been stronger, and as he phases out of his other business endeavors, photography will finally take its rightful spot as his top professional area of focus.  http://www.EtherealPixels.com.

Ana Teodorescu is an artist from Montreal, Canada. Having studied painting, drawing, sculpture, music, dance, and theater, art in all its forms is reflected in her work.

Ana was influenced by the surrealism and symbolism movements, every piece of her creation tells a story. Contrasts and deformation are used to express ideas and emotions. Animals, plants, and objects are personified. Figures are portrayed emotionally and spiritually from the perspective of their interior, as a reflection of their development.  http://acteodo.wix.com/tellmeastory.

Darlene Kaplan is an award-winning artist in the Oriental Brush Painting style using Chinese watercolors and ink on rice paper. She was born in Tennessee in 1945, now resides in the Alexandria, VA (Fairfax Co).

Kaplan started her art career in 1973 attending Calhoun Community College, AL taking art and art history.  She also took classes at the Torpedo Factory in 1983 from Diane Tesler and Danni Dawson in landscapes, still life, and portraits using oils on canvas. She attended two workshops in oriental art on rice paper taught by Professor Ning Yeh and one workshop by Charles Lu. From 1994 till present Kaplan started taking classes/workshops from Henry Wo Yue-Kee in the traditional Lingnan style of Oriental Brush Painting which is a combination of Western and East Asian art.

Kaplan is presently working on a solo exhibition for River Farm in September 2015, where she will be exhibiting close to 100 oriental brush paintings of nature as the subject matter.

She teaches weekly oriental brush painting classes in her art studio. Teaches an annual workshop where students from worldwide attend. Her next workshop is scheduled for August 2015 in her studio. Her vision as a professional artist/instructor is to share knowledge so her students will be better than she is, educate the students on the traditional methods of the Asian art, and finally making art visible by getting exposure for the arts (all arts) into the surrounding areas.

Kaplan has had many solo and group exhibitions throughout the United States including an exhibition of over 100 paintings representing Oriental Brush Painting during the Cherry Blossom Festival 2012 in Washington, DC. Her work has been exhibited in many galleries and museums including Charles Sumner School Museum in Washington, DC, Ratner Museum, SoHo District in NY City, and many, many more locations.  She has won numerous awards for her works.

Kaplan is president of the local chapter of Sumi-e-Society. Past president of Springfield Art Guild, National Pen Women, and Gallery West.

Kaplan plans to work on a series of large paintings to present to museums and galleries for solo exhibitions nationally and internationally.  http://www.darlenekaplan.com.

Bhoobalan JC was born in India, 1984. He currently is living in Texas. Right from the childhood, Bhoobalan had an inclination and a fascination towards the arts and media.

Bhoobalan is a self-taught artist, who started his experimentation with pencil drawings. Later, he became fascinated with the digital art style and began and started mastering it. He is proficient in various art applications such as Procreate, Artrage, Illustrator, Paper 53, and SketchBook Pro. Artist’s Website.

Jade Lam’s art reveals a mix of Eastern and Western influences as she was trained in various media including ink, watercolor, and oils while living in Hong Kong, Canada and the United States. Moving to different countries and cities since the age of 16, she has learned to use art, a universal language, to express her perspectives on life. Jade is often inspired by nature as well as everyday life objects. She appreciates the simple pleasures in life and celebrates them through her art.

Jade uses ink and watercolor on rice paper to interpret her subject matter. Through brushstrokes, she conveys energy to the audience. Through the thin and sensitive nature of rice paper, she captures interesting moments without hesitation. Through the use of colors, she creates a dramatic visual effect. Jade enjoys the process of making art as it always leads to unexpected and open-ended artistic creations.  jadeylam@gmail.com.

Michael’s first foray into photography dates back to the SLR days when the film was king and one waited a week for gratification. As a professional rock and classical guitar player, photography was the next stop on his journey into the arts.

After a long hiatus from photography – spending his time in the music industry and raising a family – he returned in 2011. His interests range from landscapes and travel to street shots and studio shoots. Lately, his studio has been his backyard where backdrops, rippled glass tables, and flashes are used to create a surreal environment for inanimate objects.  Largely self-taught, he brings his own perspective to his work.

He believes that the photographer is the counterparty to the subject. It’s only when both are in sync that a better photograph is produced. Traveling, another passion has enabled him to capture those one-of-a-kind moments in foreign countries when the uniqueness of a place and the right time of day all align to present themselves to a watchful eye.

Michael has had his work featured at the Boca Raton School of Art and was recently accepted into the Artists’ Guild of the Boca Raton Museum of Art. Highlights of his work can be viewed at www.michaeljdamato.com.

Murray Ince is a furniture designer and maker by trade who later turned his attention to painting and though he still makes the occasional piece has focused on painting for the last twenty years.

Murray states this about his artistic journey, “I have many years’ experience of fine art tuition, running painting experiences, lecturing at the local College on the Isle of Wight, demonstrating and running workshops for art societies and groups covering many mediums and genres in fine art. I am also a Professional Associate and promoter with the SAA (Society for All Artists), for whom I demonstrate at live shows and have also done some television, demonstrations for their ‘A Splash of Paint’ series.”

Murray is also a featured artist and product ambassador with Winsor and Newton. He runs many painting holidays in the UK and Europe and has written a book on the subject of ‘Landscapes in ‘Artisan’ Water-Mixable Oils’.

He adds to his earlier comments, “I love to paint and am privileged to be able to devote all of my time to my passion. My preference is to paint in oils though I do work in most of the other mediums with landscapes and seascapes being the subject matter that really inspires me to pick up my brushes.” http://www.murrayince.com.

Claudia Hafner approaches her subjects as portraiture, whether it is people, wildlife, flowers or architecture. She recreates the character of the subject through color and water in a loose style that thrills her as she sees the painting hang together.

As a teenager, she taught herself to draw realistic, detailed pencil drawings of the Beatles and sold them to classmates for 50 cents each. She abandoned drawing soon after because, for her, a detailed drawing made her head want to explode! Many years later when she returned to school for a degree in graphic design and multimedia, she found that what she had learned as a teenager had stuck.

When Claudia was laid off from her job in late 2001 did she decide to pursue watercolor. It had been a dream since an earlier career as an artisan, hand weaving loose, textural, drape-able fabric for a fashion designer where color and texture were her creative elements. Independent study and a watercolor critique group ensued for many years, exploring subject matter and technique. Her approach to the subject matter as portraiture emerged as did her attraction to looseness.

With a major move to South Florida in late 2013, she decided to declare herself an artist and sell her work. She recently won an Emerging Artist Award with the Gold Coast Watercolor Society of which she is a member. She also received an Honorable Mention and Special Recognition for two pieces in the painting category of an online art competition, Nature, at Light Space & Time online gallery.

John was born in Columbus Ohio, graduated from Ohio State and lived in the mountains of Southern California for 20 years. Although John learned to draw and paint as a young boy, his degrees are in the computer science field.

In 2010 his wife bought him a large easel and encouraged him to start painting again, that he began to take his art career seriously. Since then John has been selected in a number of gallery shows and juried contests, including the National Oil & Acrylic Painter's Society 2013 International Online Exhibition and 2014 Best in America show. John's Carousel Horse #1 was featured in the June 2014 issue the Artist's magazine Competition Spotlight.

Recently John has been living and working in Dayton Ohio. Many of the scenes of his recent paintings are taken from the woodland parks and scenic back roads in the area.

John works with heavy body acrylics on fairly large canvases with a lot of detail and bold colors. He calls his style 'realistic impressions' because, while the overall feel of the work is definitely realism, he offsets the detail with impressionistic splashes of color. Instead of smooth blending, he likes to use puzzle pieces of color to emphasize the complex relationship of light and shadow over form. John's inspiration comes from the hidden beauty in ordinary objects.  http://JohnJasterStudio.com.