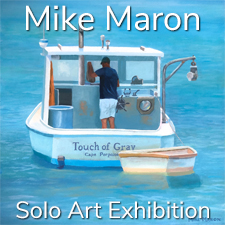 Light Space & Time Online Art Gallery is very pleased to announce that Mike Maron has been selected as one of the four winning artists of the gallery’s recent 15th “Solo Art Series” Art Competition.  Mike will now have a month-long solo art exhibition, be featured on the gallery’s front page, in the Gallery’s YouTube Channel, as well as in the “Solo Art Series” archive.

Mike is an award-winning artist based in Maine, USA. He will now be promoted by the gallery with an extensive public relations campaign.

In addition, as part of his award package, Mike will now be featured as a Light Space & Time – Artwork Archive promoted artist.

Mike’s art will also be featured on the gallery’s YouTube Channel and with an event postcard.

The “Solo Art Series” is a series of monthly solo art exhibitions for established artists who have a body of work to present to the public.  Artist participants were asked to submit the following 3 components for the “Solo Art Series” competition: 1. Their art.  2. Their artist biography.  3.  Their artist statement.  These elements were evaluated and judged, which resulted in the selection of the artists who will be featured in individual month-long solo art exhibitions.  This was the 15th “Solo Art Series” Art Competition that the gallery has conducted.

Below are Mike’s Artist Biography, his Artist Statement, along with 25 of his paintings.  We hope that you will take the time to read Mike’s information and to take a look at his art.

Mike Maron was born in Long Beach, California in 1949. His initial foray into art was as a ten-year old when his parents enrolled him in watercolor lessons. A gradually developing (and undiagnosed until some years later) case of nearsightedness diminished his interest however. By the time he was outfitted with glasses, he was on his way to a career in science, earning a Ph.D. in physiology from the University of California at Santa Barbara in 1976. After a stint as a postdoctoral fellow at the Medical College of Wisconsin, he taught medical students how their lungs function and did research in pulmonary physiology and pathophysiology at the Northeast Ohio Medical University.

After retiring and moving to Maine with his wife Dawn in 2007, and some fifty years after his first lessons, Dawn and artist Joye Moon, convinced him to pick up a paintbrush again. Since that time, he has been privileged to learn from artists Joye Moon, Judith Kinsman, Guy Corriero, Dennis Rafferty, Russel Whitten, Susan Roux, Dan Graziano, and of course his immensely talented wife.

Mike paints in oil, acrylic, and watercolor and is a member of the Art Guild of the Kennebunks. His paintings have been juried into shows of the New England Watercolor Society, the Rockport Art Association, the University of Southern Maine, and the Union of Maine Visual Artists.

His work can be seen at the Wright Gallery in Cape Porpoise, Maine, and online on both his website, mikemaron.artspan.com and saatchiart.com.

I am currently drawing inspiration from the lobstermen and women who I observe working along the southern Maine coast. Theirs is a way of life that is threatened by both climate change and the progressive loss of working waterfront.

I am personally drawn to artwork that depicts what life was like in the past and like the idea of creating art that will give future viewers a glimpse of this profession. I am particularly drawn to their fishing equipment, which can be both colorful and worn looking from years of hard use.

I am interested in unusual perspectives and how colors, light and shadow interact with one another to describe a form.