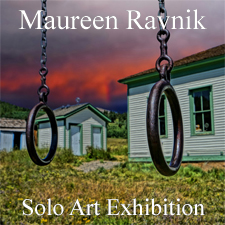 Light Space & Time Online Art Gallery is very pleased to announce that Maureen Ravnik has been selected as one of the four solo artists of the gallery’s recent 11th “Solo Art Series” Art Competition. Maureen will now have a month-long solo art exhibition and she will be featured on the gallery’s front page, in the Gallery’s YouTube Channel, as well as in the “Solo Art Series” archive.

Maureen is a Colorado based photographer. After a long career in sales and marketing, Maureen now spends most of her time outdoors taking in and capturing the scenery and wildlife of the American West. Maureen will now be promoted by the gallery with an extensive public relations campaign.

In addition, as part of her award package, Maureen will now be featured as a Light Space & Time – Artwork Archive promoted artist.

Maureen’s art will also be featured on the gallery’s YouTube Channel and with an event postcard.

Below is Maureen’s Artist Biography, her Artist Statement, along with 10 of her “Abandoned - The Series” photographs.

Maureen Ravnik was born and raised in Minnesota. A brief visit to Colorado sold her on attending college there to pursue a career in sales & marketing. She stayed and never looked back. Working and traveling a lot in that discipline opened her eyes to the wonders of the American west and reawakened childhood tendencies to creatively document her discoveries. She began making images of the American west in hopes of preserving the history, the culture, and the dreams that shaped the west.

Today, Maureen’s time is spent outdoors taking in and capturing the scenery, wildlife, and exploring other methods for interpreting and sharing what she sees and experiences along the way. Maureen has accomplished many things with her photography including images placed in the Audubon International Top 250, local, national and international juried photography exhibitions, winning placements in monthly club competitions, state park calendars, images selected for use by the City of Littleton, and many images selected as editor picks on National Geographic and for publication. Her work has been the subject of several newspapers. She was listed by LightSpaceTime.art as one of the top ten photographers to watch for in 2018. She has co-authored 2 books that document the history, beauty and environment of the second largest natural area in the country.

Maureen is an emerging talent whose methods and techniques are largely self-taught. Maureen’s inspiration is derived mostly from her environment. She explores the work of peers and connects on social media mainly to further explore processing techniques and stay on top of new developments in software and camera technology. Some of her work is strictly an in-camera capture. Some of it involves taking the file from the camera and into the computer to develop composites or several interpretations of the same scene. This helps to keep her eyes open to the many possibilities for how our world can be observed and interpreted.

My purpose in making images of abandonment in the American west rests in my hopes of preserving and sharing the history, the culture, and the dreams that shaped the west. Connecting with abandonment can be as daunting as it is interesting. Stories don't come easy and they resonate with me on many levels of emotion. I make my images by trying to convey what abandonment may have felt like to those whose dreams were shattered. It is also a documentary on the idea that abandonment affects all levels of society whether it be personal or commercial. I hope my viewers will experience and connect with that feeling much like I did.