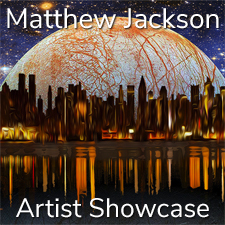 Light Space & Time Online Art Gallery is extremely pleased to announce that Matthew Jackson has been named as the Gallery’s new featured artist and he will now be promoted by the gallery for the next 14 days in the gallery’s Artist Showcase.

Matthew is an award-winning artist based in Colorado, USA. Matthew was selected as 1 of the top twelve finalists in the gallery’s 18th Solo Art Exhibition Series. The placement in this competition qualified his art to be showcased in this feature.

Matthew’s Artist Showcase feature will be promoted to over 350+ major news outlets, with inclusion on Google News & Bing News. In addition, the gallery will also be featuring and promoting his artwork in the gallery’s various social media networks for further exposure.

Below are Matthew’s Artist Biography, Artist Statement and 5 images that were submitted to this competition.

Matt’s art is born of depression. Prior to 2009, he was consumed by my job to the exclusion of his family and the truth of who he was meant to be. Matt was extremely successful in what he “accomplished.”

In 2009, as the pressures and excesses mounted, he was toppled and descended into a profound depression. Matt was out of work for two months. When he returned to his job, he was eventually transferred into a less stressful, less prominent position. Some would call it failure.

As Matt recovered, he found solace through Photo Shop. He began making pictures and eventually reclaimed his life through art. The images he creates speak to the person who was hidden for all those years. Matt was liberated from the mundane world he once dominated. Art has set him free!

Now, at age 67, Matt shows his work in Denver and in mountain art fairs throughout Colorado. People are excited by his images, and he considers himself moderately successful having sold over 1600 pictures.

Matt’s art is full of motion and bright with color. All of his finished images are photo based and he uses PS CS6 and Topaz software to create his art. Many of his pictures use multiple photos to achieve the desired outcome; these are called ‘composite’ images. Matt does not claim to follow a particular genre, though he believes a common strain runs through his work. He has many limited editions of 100 or less. Matt believes his work appears best when infused on a sheet of aluminum. This is how he presents much of his work at art shows.

Matt is retired now and actively supported in his artistic endeavors by his spouse of over 40 years and by his children. He doesn’t know what the future has in store for him. But he does know that this journey is not over, and it includes his family and the truth of who he is today.

My work is photo based. I often use several photos to create one image. These composite works are manipulated with PS CS6 and Topaz software. My art is bright with color and full of motion. I have no formal training and came upon my methods through trial and error. I try to create art that makes people think about their lives and the lives of others. All of my pieces are limited editions. I have won several international awards, including a first place award for CityScapes sponsored by LST.