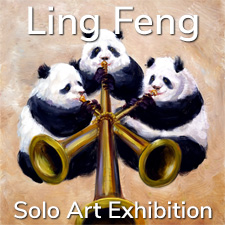 Light Space & Time Online Art Gallery is very pleased to announce that Ling Feng has been selected as one of the four artists of the gallery’s recent 15th “Solo Art Series” Art Competition.  Ling Feng will now have a month-long solo art exhibition and he will be featured on the gallery’s front page, in the Gallery’s YouTube Channel, as well as in the “Solo Art Series” archive.

Ling Feng is an award-winning artist based in the San Franciso Bay area, California, USA. Ling Feng will now be promoted by the gallery with an extensive public relations campaign.

In addition, as part of his award package, Ling Feng will now be featured as a Light Space & Time – Artwork Archive promoted artist.

Ling Feng’s art will also be featured on the gallery’s YouTube Channel and with an event postcard.

Below are Ling Feng’s Artist Biography, his Artist Statement, along with 25 of his images.  We hope that you will take the time to read Ling Feng’s information and to take a look at his “Trumpet Kingdom” series artwork.

Lingfeng’s passion for art began from his childhood. He entered the Shanghai Art Institute to study art, laying a solid base for representative paintings. He started his art career as a freelance illustrator. His artworks have been published in many books and magazines. In 1985, he came to the United States and obtained his MS and Ph.D.

Lingfeng is an art professor currently lives in the San Francisco bay area. Having experienced both Eastern and Western cultures, Lingfeng embraces both and meld them together into his art. In his work, arts from the West and the East, ancient and modern times cross each other. These paintings draw the audience in with the tension between the familiar and the unfamiliar and trigger the viewer’s desire to explore the truth and think critically.

French word Déjàvu describes scenes that people seem to have seen, but may not exist. Lingfeng’s artworks feature on themes crossing space and time so that the picture forms a realm like Déjàvu. He often uses visual realism to express ridiculous scenes, leaving room for curiosity and imagination. Use the charm of paintings to trigger the viewer's desire to explore the truth.

The "Trumpet Kingdom" is a series of 25 paintings representing a virtual world created based on the artist's own real-life experience. In this Kingdom where people's minds are imprisoned, they have been brainwashed since childhood. They confused with right or wrong, inferiority in heart, worship of power, proud of bragging. The Kingdom blinds people by propaganda and agitation to maintain authoritarian rule. Those who truly tell the truth will be punished. The artist created a virtual little girl often in the picture, looking at the world with cold eyes, seeking the truth.