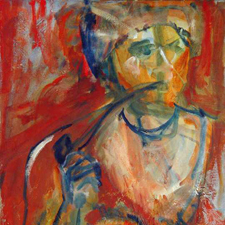 CHICAGO, IL – January 20, 2012 /- Leon Sarantos recently announced that the Paul Henry’s Art Gallery in Hammond, Indiana is now representing him and currently, he is showing several of his paintings the in the gallery’s “Directions” Art Exhibition.

Leon Sarantos grew up in the Midwest and now lives and creates his art in Chicago, Illinois. The Paul Henry’s Art Gallery is now featuring his triptych painting, titled “Dawn Twilight - The Sun, The Moon, The Stars”. Leon explained the origin of this painting in the following words, “this painting is based on my memories of traveling in the High Sierra Mountains. I employed a sharp contrast of dark and light, along with the fusion of the shading with the shadows, as the eye registers the high values as an abstract shape on a bed of dark values.”

Three additional paintings of Leon’s are also on display in the main gallery; “Young Lady With Long Pipe”, “Organic Creatures Going To The Beach” and “Ecuadorian Statue”. In these newly created paintings he employed an artistic approach that combined and fused both abstract and representational art.

His work “Young Lady with Long Pipe” is an abstract figurative artwork. This painting was previously on display at the Rogers Park ArtWalk, a curated group exhibition, which is part of the Chicago Artists Month.

The artwork “Organic Creatures Going to The Beach” is a whimsical abstract painting with soft pastel colors. Leon states, “To me, this painting suggests a strange family of beings on an outing.” This painting was previously shown in a juried art exhibit at the Cornerstone Art Center & Gallery located in Whiting, Indiana.

His “Ecuadorian Statue” is his representation and focus of a piece of art that he purchased during his travels in South America. He states “the painting is portrayed in dark tones as a man gazes at the statue, giving it a mystical appearance.”

The Paul Henry's Art Gallery represents more than 100 local and national artists and is located at 416 Sibley Street, Hammond, Indiana, 46320 and their telephone is 219-687-5015. The gallery’s website is http://www.paulhenrysart.com/

Leon (Leonidas) Sarantos originally grew up in the Midwest and currently lives in the Hyde Park neighborhood of Chicago, Illinois. He obtained a Bachelor of Architecture degree in the College of Arts and Architecture at the University of Michigan. After moving to Chicago, Leon continued his work in architecture and art, and began his studies in figure paintings at the Art Institute of Chicago. He has exhibited his work extensively in solo and group art shows on a national basis. His website is http://www.leonsarantosartist.com