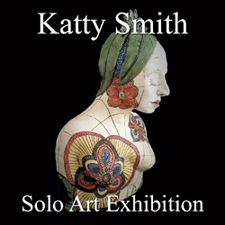 Light Space & Time Online Art Gallery is very pleased to announce that Katty Smith has been selected as one of the four artists of the gallery’s recent eighth “Solo Art Series” Art Competition.  Katty will now have a month-long solo art exhibition and she will be featured on the gallery’s front page, in the Gallery’s YouTube Channel, as well as in the “Solo Art Series” archive.

In addition, as part of her award package, she will now be featured as an Artsy.net Light Space & Time promoted artist.   The LST Artsy.net page will feature 5 pieces of the artist’s art, a small artist statement and their website URL’s as part of the gallery’s overall prize package.

Katty’s art will also be featured on the gallery’s YouTube Channel and with an event postcard.

Below is Katty’s Artist Biography, her Artist Statement, along with 20 of her sculpture artworks.  We hope that you will take the time to read Katty’s information and to take a look at her incredible and stirring art.

Katty Smith was born and raised in the small town of Halifax, Virginia.  Katty left home to attend the University of N.C. Women’s College, but ended up marrying her high school sweetheart two years later. The journey in life began that would include two children, an MBA, three grandchildren and twenty-five moves.

At age 65 she discovered her passion in life, sculpting in clay. After studying sculpture two years at Armstrong Atlantic State University, Savannah, GA, she moved to Florida and continued instruction for three years at Crealde School of Art.

Katty is currently a studio artist in New Smyrna Beach, FL, where she is affiliated with various artists’ organizations. Her work has been accepted for numerous local and regional juried exhibits, where she has won awards including four “Best in Show”.

The subject matter fueling my creative process is always constant, the female figure; however, there is never a predetermined picture in my mind of the finished product. The partial to realistic female face is a defining trademark of most of my works and often sets the wheels in motion. I want the faces to exemplify the female human spirit of strength and/or compassion. This love of the female human spirit resonates from my childhood growing up among very strong, close knit women.

My goal in sculpting women is to convey to those who view the work, a sense of personal connection to women in their lives who have influenced them. Katty's website: www.sculpturekat.com