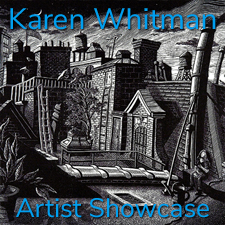 Light Space & Time Online Art Gallery is extremely pleased to announce that Karen Whitman has been named as the Gallery’s new featured artist and she will now be promoted by the gallery for the next 14 days in the gallery’s Artist Showcase.

Karen is an award-winning artist based in New York, USA. Karen was selected as 1 of the top twelve finalists in the gallery’s 16th Solo Art Exhibition Series. The placement in this competition qualified her art to be showcased in this feature.

Karen’s Artist Showcase feature will be promoted to over 350+ major news outlets, with inclusion on Google News & Bing News. In addition, the gallery will also be featuring and promoting her artwork in the gallery’s various social media networks for further exposure.

Below are Karen’s Artist Biography, Artist Statement and 5 images that were submitted to this competition.

Karen Whitman was born in The Bronx, NY. She grew up on Long Island and has lived in Woodstock, New York since 1994. She has a BFA in Printmaking from S.U.N.Y. at Buffalo, and studied at The School of Visual Arts, Parsons School of Design, The Woodstock School of Art, and The Art Students League of New York.

Whitman is a member of the Society of American Graphic Artists and Allied Artists of America and has won numerous awards for her prints, including seven medals of honor from national juried exhibitions through The National Association of Women Artists, The Catharine Lorillard Wolfe Art Club, and The Allied Artists of America. Karen is listed in Who's Who in American Art and Who’s Who in America, and was featured in American Artist Magazine in December 2002, with an article focusing on the technique of making a multi-block color linocut.

Karen was also a recipient of The Clark Hulings Fund’s Art-Business Accelerator Fellowship in 2019. In October of that year, Whitman was featured on the cover and in an article of The Journal of The Print World, which is a widely distributed publication for printmakers and print collectors. She has also been commissioned to make the annual print for 2021 for The Print Club of Albany.

Whitman’s prints can be found in the collections of The British Museum in London, The Institute of Fine Arts in Taipei, The Samuel Dorsky Museum of Art in New Paltz, NY, The Jane Voorhees Zimmerli Art Museum in New Brunswick, NJ, The Portland Art Museum in Oregon, and Hofstra University in Hempstead, NY, among others. In New York City, her work is in the collections of The Museum of The City of New York, The New-York Historical Society, The New York Public Library, The New York Transit Museum and the Noble Maritime Collection on Staten Island.

Karen has had many solo or two person exhibitions, including at The Belskie Museum of Art in Closter, NJ, The Albany Center Galleries in Albany, NY, The Woodstock Artists Association and Museum in Woodstock, NY, St.Thomas Aquinas College Gallery in Sparkill, NY, The Wagner College Art Gallery on Staten Island, and, in Manhattan at The Old Print Shop, The Interchurch Center Galleries, and The Pen and Brush.

Whitman’s work has been exhibited extensively nationally, including at The National Arts Club in NY, The Johnson Museum of Art at Cornell University in Ithaca, NY, The Hunterdon Museum of Art in Clinton, NY, The Schenectady Museum in NY, and in numerous annual exhibitions of The National Association of Women Artists, Allied Artists of America, Audubon Artists, and The Catharine Lorillard Wolfe Art Club. She has also been exhibited internationally in Ireland, Taiwan and Australia.

After graduating from university, Karen moved to Manhattan and took art courses, worked various graphic design jobs and was the lead singer in The Balkanizers, performing Eastern European folk music, including at Lincoln Center Out of Doors and Carnegie Hall to accompany The George Tomov Yugoslav Folk Dance Ensemble. She also performed as an acrobat with the second season of The Big Apple Circus in 1978. In 1980

Whitman began working at a fine art silk-screen atelier making hand painted separations to create limited edition serigraphs of contemporary paintings, fine-tuning her understanding of the fine art print. In 1991, she took a two-week workshop at the Woodstock School of Art and became enchanted with the art colony. She moved to Woodstock in 1994, where she discovered that the block print was her preferred medium and true calling. She soon met her husband to be, an established working and talented Woodstock artist and began a life partnership of sharing artistic visions and supporting each other in their respective projects and goals.

From 2010 to 2016, Karen and her husband directed their own gallery in Woodstock, exhibiting their own work and that of 7 other contemporary printmakers. Their emphasis was on educating the public about the art of the print, giving frequent talks and demonstrations about the techniques and aesthetics of the hand-pulled print. They vacated the building when it was sold in 2016, but Karen continues to teach periodic weekly classes and 3-day intensive workshops on the black and white linocut to share her knowledge of and enthusiasm for the medium with her students at The Woodstock School of Art.

In college, I was illustrating for the university newspaper when I fell instantly in love with the reproduced image, sparking my interest in multiple images. There, I studied etching and lithography but it wasn’t until I took a workshop at the Woodstock School of Art and moved to Woodstock in 1994 that I was introduced to and became fascinated by the linoleum block print.

It was there that I became inspired by the graphic works of such master printmakers as Clare Leighton, Fritz Eichenberg, and the graphic novels of Lynd Ward which cemented my desire to become a professional printmaker and where the linocut became my passion and medium of choice. The medium also lends itself so well, with its high contrasts, crisp edges and angle friendly nature, to the rhythms and imagery of the city - the primary subject of my work.

I especially appreciate the challenges of creating an impactful work in black and white, using extreme light, dark and texture to bring an image to life without the dazzle of color. I start by finding an exciting location, usually complex, as it is the complexity of it that excites me; it encourages the eye to meander, explore and discover new details with each viewing. A contour line drawing is all I need to get started. If the light source I see is not dramatic enough, I choose my own and infuse it into the sketch when I return to my studio.

Ultimately, when a black and white mockup is complete, I trace the line work and transfer the line work via the tracing paper mirror image onto the linoleum block with transfer paper or graphite. Using the mockup as a guide, I carve away the non-image areas, and then roll black ink onto the surface. I place the inked block on the printing press, place the paper on top, and crank it through.

The physicality and discipline of carving and the labor intensiveness of printing by hand reminds me daily of the hard work and patience it takes to accomplish most anything meaningful. My linoleum block prints express my exuberance and affection for city life.

I am inspired by urban architecture, the people, and all the other creatures that inhabit city sidewalks and rooftops. I imbue them all with life, with the swaying and leaning buildings often taking center stage. I portray the city as positive, accessible, and beautiful, even playful; but inadvertently, the result is a surprising sense of mystery from juxtaposing the whimsical with a sense of foreboding. The city embodies all of this at once, which is why it inspires me and is the primary subject of my work

In addition to the images I draw entirely from life, there are those I invent completely. There are also those that are a combination of the two, offering something more than the sources that inspired them. The prints are narrative in quality and often include people interacting with their environments to create a world and tell a story with contrasting patterns and textures, leading the eye from one vignette to another, each telling its own tale of the urban experience. The viewer is invited to participate in and invent the story that is suggested to them personally, by that print’s captured moment.

I have been told that my prints evoke a sense of the city that people have within them that cannot be captured by taking a photograph, which is difficult for them to put into words, but makes them feel good and uplifted to recall. It is touching people in this way that inspires this work. Making these prints is an expression of love and connection keeping me at peace with and loving the city, something I hope that viewers of my work experience as well.