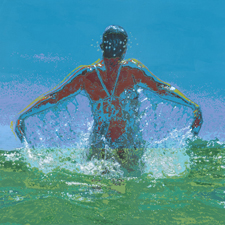 WASHINGTON, DC – January 25, 2016 - / Karen Landrigan has been chosen as the top award recipient of the EveryLife Foundation’s Rare Artist Contest. Selected by committee from more than 275 entries, Landrigan’s painting titled ‘Roaring’ was chosen as the foundation’s winner for 2015.

The award recipient is selected by a panel of rare disease community leaders and Landrigan’s winning entry will be on display at the annual Rare Artist Reception, Capitol Hill, Washington D.C. on February 29th to March 3rd 2016.

The EveryLife Foundation for Rare Diseases is non-profit society dedicated to accelerating biotech innovation for rare disease treatments through science-driven public policy. Currently, there are fewer than 400 approved treatments for 7,000 rare diseases affecting more than 30 million Americans. The science exists for many of these diseases to be treated; however, treatments may never be developed because of roadblocks in the development process, such as a lack of investment and a challenging regulatory environment. The Foundation works with Patient Organizations, Industry, Academic Scientists, the Food and Drug Administration (FDA), and National Institutes of Health (NIH) to improve the clinical development process.

The EveryLife Art Contest was established to exhibit the unique gifts of individuals affected by rare diseases and to promote the expression of their stories through art.

Landrigan suffered a severe stroke three years ago and is diagnosed with the rare condition of fibromuscular dysplasia. After 30 years as a designer, innovator, metalsmith, Landrigan now devotes herself almost exclusively to painting. Newfoundland born, she is also an elected member of the Society of Canadian Artists. Landrigan’s first canvas drew rave reviews and she has been an online sensation since her paintings began to appear in public a year ago.

When asked about the award Landrigan said “The Ocean which is my first love has an unconquerable roar. I have tried to capture that in my work. In the words of the poem Invictus “I am master of my fate, I am captain of my soul”. I want everyone to have that unconquerable feeling, especially those with a rare and severe disease.