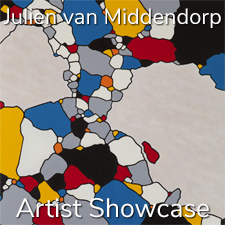 Light Space & Time Online Art Gallery is extremely pleased to announce that Julien van Middendorp has been named as the Gallery’s new featured artist and he will now be promoted by the gallery for the next 14 days in the gallery’s Artist Showcase.

Julien is an award-winning Dutch artist based in Czechia (Czech Republic). Julien was selected as 1 of the top twelve finalists in the gallery’s 19th Solo Art Exhibition Series. The placement in this competition qualified his art to be showcased in this feature.

Julien’s Artist Showcase feature will be promoted to over 350+ major news outlets, with inclusion on Google News & Bing News. In addition, the gallery will also be featuring and promoting his artwork in the gallery’s various social media networks for further exposure.

Below are Julien’s Artist Biography and 5 images that were submitted to this competition.

Julien van Middendorp is a Dutch painter, renowned for his large-scale oil paintings, in which the colours combine and mingle to form relationships and to create thoughts, fantasies and messages.

Colours, basically, are only labels for different wavelengths of light. In that sense, colours “only” represent degrees of quantity. However, on Middendorp’s paintings colours became essential qualities. A colour, not a line, is the primary constitutive moment of the (ever-changing) structure of the world.

This is a crucial discovery made by Cézanne, van Gogh, Monet and others in the 19th century, and very thoroughly investigated by artists of the 20th century. And this discovery has kept its relevance until now.

Julien van Middendorp has always been aware of and has reflected this challenging journey of liberating colour from shapes and figures and, in fact, dissociating a painting from representation of things. His works are based on a perfectly constructed composition and the use of primary colours. This leads to the engagement of the viewer’s sight, where colours are processed to form the resulting perceptions, emotions, and, possibly, even some kind of behaviour.

To paraphrase Shakespeare, “the painting created by an artist is in the eye of the beholder.” As far as the topic is concerned, Julien is bountifully inspired by the urban life, its movements, flows and changes. The urban universe provides his paintings strong organic dynamics. What is very positive about Julien’s works is its friendliness to those viewers who have not yet made their essential decision to try to step (or rather jump) across the abyss between the concrete and the abstract.

While Julien’s paintings are basically abstract, a viewer, standing in front of them, can mitigate his or her feeling lost or baffled by anchoring in the safe haven of the concrete: figures, landscapes, harmonies and music. But with the bonus of seeing and appreciating abstraction at the same time.

Julien’s style has been influenced by the world-renown artistic movement “Cobra” (1948–1951), with members such as Karel Appel, Pierre Alechinsky and Asger Jorn. Julien uses primary colours as constitutive elements of his artistic architecture. His paintings refer also to the Dutch artistic movement “De Stijl”, which was founded by such renowned artists as Piet Mondrian, Vilmos Huszár and Theo van Doesburg, in 1917.

Since his childhood, Julien van Middendorp has experimented with large-scale drawings and watercolours. Later, he studied at the Nimeto, school of design in Utrecht, Netherlands. He has been living and working in Prague for a couple of years now, finding fresh inspiration in the local culture. This inspiration has led to a new collection of oil paintings, which are now presented to the public.

Julien’s art can be viewed at his website: https://www.galleryvanmiddendorp.com