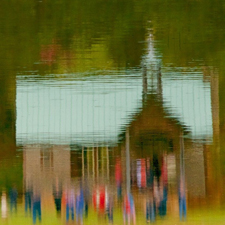 FLOYD, VA, August 2, 2016 - / Joel Gendelman is very pleased to announce that his image “Church by the Lake” has been selected for the 2016 Jax Juried Exhibition at the Jacksonville Art Center in Floyd, Virginia.

This nationally juried exhibit will run from August 13th through the end of September 2016. This is the third time that one of Joel's images has been a part of this annual exhibition.

The Jacksonville Center for the Arts’ mission is to facilitate and showcase artistic endeavors and creativity; to provide education in the arts throughout our rural community and region.  The center is located at 220 Parkway Lane South, Floyd, VA 24091 – Tel. 540-745-2784 - info@jacksonvillecenter.org - http://jacksonvillecenter.org.

Joel Gendelman began photographing at the age of 16 on the Lower East Side of New York when it became the East Village. He was shortly exhibited at a local photography gallery and has been composing pictures since. His images have been part of a myriad of nationally juried competitions. Joel's work has been showcased in several one-person exhibits.

His first love is portraiture. Joel cherishes the moment when the subject, the scene, and the artist are woven together. He also treasures landscapes where the elements of sky, building, and earth come together to create a unified emotion.

The photographers whom Joel most emulate are Diane Arbus and Lisettee Model for how they captured humanity in the most unlikely places. He also studied the work of Karsh, Man Ray, Robert Mapplethorpe, Edward Weston, and Cartier Bresson.