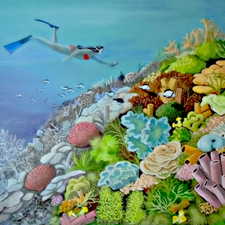 BRUNSWICK, ME – February 7, 2013 / - Janet Glatz is pleased to announce that she has been juried into the upcoming Parallax Art Fair in New York City, NY and will be exhibiting her series, "Man and Sea".

Maine Artist Janet Glatz announced today that she has been selected for the juried international Parallax Art Fair to be held at the Prince Charles, East 27th St. between Madison and 5th Avenue, New York City, NY on May 10 – 12, 2013. The show is free and open to the public. For additional information on this event go to http://www.parallaxaf.com

Janet Glatz is known for her realistic paintings which are both striking and allegorical. She lives and creates in Brunswick, Maine, where she also teaches out of her studio. Janet recently stated, “I am delighted to be selected and to participate in a show that involves such an internationally diverse group of artists, and to present my new series, Man and Sea.”

Janet Glatz is a lifelong Maine resident and painter of more than 20 years. She sells her work both regionally and nationally. Affiliations include 5 Rivers Arts Alliance, Brunswick, ME; Boothbay Region Arts Foundation; and Maine Art Gallery in Wiscasset. Her website is http://janetglatzmaineart.com