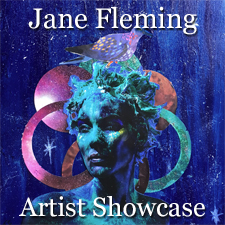 Light Space & Time Online Art Gallery is extremely pleased to announce that Jane Fleming has been named as the Gallery’s new featured artist and she will now be promoted by the gallery for the next 14 days in the gallery’s Artist Showcase.

Jane is an award-winning Texas based artist who specializes in mixed media collages. Jane was selected as 1 of the top twelve finalists in the gallery’s recent 12th Solo Art Exhibition Series. The placement in this competition qualified her art to be showcased in this feature.

Jane’s Artist Showcase feature will be promoted to over 350+ major news outlets, with inclusion on Google News & Bing News. In addition, the gallery will also be featuring and promoting her artwork in the gallery’s various social media networks for further exposure.

Below are Jane’s Artist Biography, Artist Statement, a statement about her “To Wander” mixed media collage series and 5 images that were submitted to this competition.

Jane Marshall Fleming is a PhD student in the Department of English at the University of Texas at Austin and the author of Ocotillo Worship (APEP Publications, 2019) and Violence/Joy/Chaos (Rhythm & Bones Press, 2020). Her poetry, collages, and prose have appeared or are forthcoming in Glass: A Journal of Poetry, Ghost City Review, Barren Magazine, Pussy Magic Magazine, and Honey & Lime, among others. She was a finalist for Light, Space, and Time Gallery’s solo show series, and will be the Artist in Residence for the Main Street Arts Gallery in Clifton Springs, New York in July, 2019.  She is currently a Contributing Editor at Barren Magazine.

In my mixed media collages, I am primarily interested in capturing the divine in all beings. Most often, I find myself celebrating the powerfully feminine in each piece. Several of my collages exhibit non-traditional Madonnas who derive their power from their internal multitudes, rather than simply their reproductive capacity. My work is inspired by collage artists like Sebastian Wahl, who also work with found images and resin. Although I have been largely self-taught in visual art, I have been mentored by designer Jordan Aman, a student of artist Carrie Anne Baade. I am currently a PhD Student at the University of Texas at Austin. My collages have been featured in several print and online publications including Honey & Lime, Rose Quartz Magazine, and Burning House Press. My full portfolio and my written publications can be found on my blog, lunaspeaksblog.com.

The mixed media collages offered here are part of my new series entitled, "To Wander." The series gets its name from John Milton’s use of the word “wander” in his epic, Paradise Lost, which narrativizes the “fall of mankind,” as told in the Christian Bible. In Paradise Lost, it is Eve’s “wandering” that leads to the “fall of man.” Milton uses “wander” from the Latinate root for the verb “to err,” thereby suggesting that a wanderer is, in fact erring. I interact with this interpretation in two ways. First, my series produces “Eves” that wander on purpose. They are fully in control of their processes of discovery. Additionally, these Eves are centered rather than the tragical Adam. They are engaging in a pleasurable wandering– one that is productive for its lack of direction, rather than reductive for its erring. Second, each of the collages are created from found images, making the creative process one of equally pleasurable wandering, thereby mirroring the journeys of the women in the pieces.