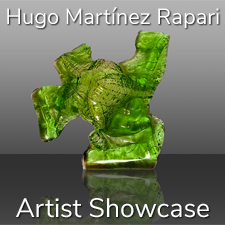 Light Space & Time Online Art Gallery is extremely pleased to announce that Hugo Martínez Rapari has been named as the Gallery’s new featured artist and he will now be promoted by the gallery for the next 14 days in the gallery’s Artist Showcase.

Hugo is an award-winning artist based in Montevideo, Uruguay. Hugo was selected as 1 of the top twelve finalists in the gallery’s 16th Solo Art Exhibition Series. The placement in this competition qualified his art to be showcased in this feature.

Hugo’s Artist Showcase feature will be promoted to over 350+ major news outlets, with inclusion on Google News & Bing News. In addition, the gallery will also be featuring and promoting his artwork in the gallery’s various social media networks for further exposure.

Below are Hugo’s Artist Biography, Artist Statement and 5 images that were submitted to this competition.

Award-winning artist Hugo Martínez Rapari lives and works in his hometown Montevideo, capital city of Uruguay. Born in 1964, he has been in a quest for art throughout all of his life. He started doing amateur drawing at an early age and then he started pursuing a formal and thorough training in arts.

In the 90s, after obtaining a C.P.A. Degree from Uruguayan State University, Martínez Rapari traveled around South and North America, learning about the essence and simplicity of the continent. During this trip, he started sensing how the countless bright and vibrant colors pervade onlookers with a certain feeling of unusual joy, vitality and coolness.

Martínez Rapari’s glasswork examines the opposing aesthetic notions of dimensionality and flatness. His creativity is bound by a strong philosophical nature, the lasting quest to breathe in life and explore every treasure to be found. He has developed a unique visual method of sharing these and other daily insights in a style that is decidedly bold, graphic, and colorful. He takes imagery to another level by using overlapping or juxtaposed glass panels, creating new visual realities as the viewer shifts from one perspective to another. Using discarded glass with a modified kiln fused technique, his work feels grounded, having a strong connection to the earth, yet manifests a light airiness through each rounded form.

The contrasts created by each of these elements give Martínez Rapari’s artwork a modern yet primeval quality. Space, absence of form, and shadow become shifting elements of the composition. Much like one of his favorite subjects, the seaside, Martínez Rapari’s art is subject to powerful elemental movements. This means much to his design, for nature is his muse and its influence rests at the core of his being with no pretense and no ego. Nature has “imperfect and complete beauty than needs no beautifiers, labels or identities in order to be”, he explains. To Martínez Rapari, however, the environment and human world are two sides of the same coin. His approach bestows the same significance to a lowly shell on the beach as to a human or plant inhabitant; either is a remarkable form to be explored and appreciated both visually and philosophically. This sensibility is the impulse behind much of his creative life and leaves him open to whatever crosses his path.

Martínez Rapari’s practice is informed by an intuitive and experimental approach to different art languages (glass sculpture, painting, jewelry, photography, digital art, installation and video art). His work has been exhibited worldwide and published in books and magazines. His artworks are represented in numerous international art collections.

My mother, Violeta, was the first woman in Uruguay that learned blown glass when working at a factory in the 50s. As an emotional connection, I was enthralled by the possibilities glass offers. Its characteristics make it intriguing and yet poetic.

Glass lets me express -in an almost magical way- my spirituality and beauty -without resorting perfection nor conditionings- that all human beings have. It brightness and luminosity speak of permanence, light and wisdom. Just like art, it is put together and then broken down time and again. Glass molecules change, break apart and come together reorganizing themselves through heat, like a timeless unruffled embrace. The results are one of kind, unique, changeable and ethereal pieces. They are all about self-acceptance.

Like our divine human essence they are matchless as a mathematic uniqueness theorem of the true being existential paradigm. My body of work explores personal, community and country identity and the complex relationship between humans and the environment while simultaneously reflecting back into my own childhood memories.