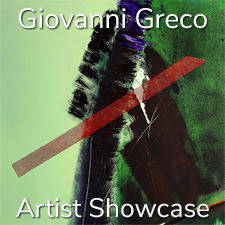 Light Space & Time Online Art Gallery is extremely pleased to announce that Giovanni Greco has been named as the Gallery’s new featured artist and he will now be promoted by the gallery for the next 14 days in the gallery’s Artist Showcase.

Giovanni is an award-winning artist based in Catania, Italy. Giovanni was selected as 1 of the top twelve finalists in the gallery’s 15th Solo Art Exhibition Series. His placement in this competition qualified his art to be showcased in this feature.

Giovanni’s Artist Showcase feature will be promoted to over 350+ major news outlets, with inclusion on Google News & Bing News. In addition, the gallery will also be featuring and promoting his artwork in the gallery’s various social media networks for further exposure.

Below are Giovanni’s Artist Biography, Artist Statement and 5 images that were submitted to this competition.

Giovanni Greco lives and works in Catania, an Italian city on the east coast of Sicily.  This ancient Greek colony sits at the foot of Mount Etna and is rich in Baroque architecture. From his teens, Giovanni showed remarkable manual and artistic ability which deepened over the years with continuing research and study of painting techniques.

Giovanni began his artistic activity in Rome in the early ’90s. After completing artistic and biologic studies, he attended the Naked School at the Academy Fine Art of Catania. A passion for sixteenth and seventeenth century art led Giovanni to focus his studies on the works of Caravaggio, Poussin and, above all the Flemings, van Eyck, Brueghel…

Giovanni works in his hometown as an assistant at art-cultural associations, galleries, and art studios, contributing to the realization of local exhibitions and commissions.  At the same time, to satisfy his classicist needs, he deals with Hellenic art. Giovanni believes that aesthetic perfection as well as technique are key in completing the vast curiosity that leads him to intersect with contemporary painting. In order to expand his knowledge and find its inner dimension driven by greater reflection on life, Giovanni tries to interpret sometimes “ineffable” thought as a way to put in new light the fundamental problems from which his mind does not cease to be released.

In my works, I try to create a human vibration feel that enhances feelings through form, line, color and intentionality, the encounter with the unexpected, for the opening of new worlds and new possibilities of vision. Color is assumed in its linguistic value, which also applies to signs, and are allowed to constitute an alphabet, without a code, that guarantees a form that reflects an idea or trace of an emotion.

Therefore, these codes are inserted in the color and layout, in the diagram of the tensions, of the rapidity, of the cadence, which the gesture meets while it explores the inner space and the surface of the paint as if in search of an access or contact point.