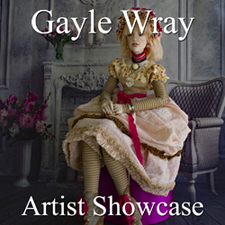 Light Space & Time Online Art Gallery is delighted to announce that Gayle Wray has been named as the Gallery’s new featured artist and she will now be promoted by the gallery for the next 14 days in the gallery’s Artist Showcase.

Gayle was selected as 1 of the top twelve finalists of the gallery’s recent Solo Art Exhibition Series #5. The placement in this competition qualified her art to be showcased in this feature.  Below are Gayle's Artist Biography, Artist Statement and 5 images that were submitted to this competition.

I began making cloth dolls with the intent to see how far I could take the art. I feel I've barely scratched the surface of what is ultimately possible. I love working with fabrics and I wanted to create an articulated doll that could pose naturally and reflect its owners changing moods. My passion for fashion design has helped me create the mood and era of my dolls while designing beyond the boundaries has helped open up new ways to create the details and accessories.

While I love and employ old style doll making techniques I embrace technology and 3d print most of my high heeled shoes. My goal is to create a doll that embodies vintage and timeless style. The 70’s and 80’s were an inspirational time for me, but I pull from all eras and interject nostalgic touches into all my designs.

Gayle Wray began making soft sculpted dolls three years ago. She found her ability to create soft sculpted figures in her early 50s. Her love for dolls and fashion had been with her throughout her life, but only recently did she put her skills together as a doll maker. She had developed skills as an artist, illustrator, seamstress and a designer much earlier. She said, “My journey as a doll maker was made over time, it came to me without even knowing that’s what I wanted to do.” She was drawn to certain areas of art that culminated with the idea of creating articulated dolls that included her skills that she had gained throughout her life. She had spent much of her younger years studying and later illustrating fashion images.

Her illustrative techniques in Prismacolor pencils and gel pens fit the faces of soft sculpting perfectly. It is difficult to see in the images shown in this article, but the faces are drawn on a curved surface. The relative level of the dimension given to each face is deliberately marginal. The noses are indicated only minimally giving the eyes and lips the focus of the gently needle sculpted face. The additional depth and 3-D look is added in Trompe-l'oeil style. This 1400-1500 Renaissance style of painting was developed by the French and Italians as an art technique that uses realistic imagery to deceive the eye with optical illusion by creating forced perspective.

As an art enthusiast Gayle was enamored by the beauty of the Hollywood stars. She recognized the romance in the faces and costumes of the stars of the 60s, 70s and 80s. As she creates her figures she incorporates the flair of those days. These creations take her to another dimension, they become a conduit to another level of style in an inspirational direction. She draws inspiration from life and her imagination to create these exceptionally beautiful figures.

Gayle uses 100% cotton quilting fabric like Kona for the entire doll. She pre-washes it on the delicate cycle, with fabric softener, this helps to keep it soft and easy to sew. She wants the fabric to glide smoothing under the presser foot as she creates her sculpts. Much of her figure is sewn by machine, then for the sculpting portion she uses the “Ladder Stitch” or “Hidden Stitch”.

Using the teddy bear joints works perfectly to give her arms and legs the ability to be posed. The only tools she uses are a sewing machine, needles for hand sewing and small turning tubes for the fingers and hemostats for other purposes. It was nearly impossible to find shoes for her creations so she learned to make her own.

She never runs out of motivational information, just watching a movie from the 70s gives her all of the inspiration she needs. Some of her creations include Marie Antoinette, Bettie Page, Marilyn Monroe and Black Madonna and Child. Her one of a kind creations may be seen at galewraydolls.com. She features scores of creations including a memorial sculpt of “Prince”.

Prices of creations range from $1,500 to $3,000 depending on the complexities of the sculpt and the vignette. Her signature look is easily seen in the faces and costumes of her entire line of creations. Recognizing a “Wray Hollywood Fashion Doll” is as easy as recognizing the art of the Masters from Europe. You may contact her personally at gaylewray@yahoo.com, Gayle is easy to talk to and loves to share her knowledge of creating these gorgeous one-of-a-kind, hand sewn figures.  -Jack Johnston