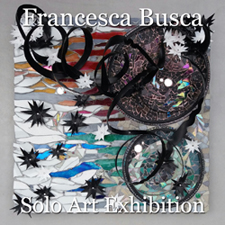 Light Space & Time Online Art Gallery is very pleased to announce that Francesca Busca has been selected as one of the four artists of the gallery’s sixth “Solo Art Series” Art Competition.  Francesca Busca will now have a month long solo art exhibition and she will be featured on the gallery’s front page, in the Gallery’s YouTube Channel, as well as in the “Solo Art Series” archive.

Francesca Busca is a mosaic & mixed media artist from London, UK.  Francesca will be promoted by the gallery with an extensive public relations campaign, provided by Kjprnews.com. They will promote and circulate her winning press release to over 1000+ News Outlets, Premium FOX, CBS, NBC, CW Affiliated Sites, 500 TV & Radio Sites, 250 Regional & Industry Site through Kjprnews.com. and through LST gallery’s broad social media network.

In addition, as part of her award package, she will now be featured as an Artsy.net Light Space & Time promoted artist.   The LST Artsy.net page will feature 4 pieces of the artist’s art, a small artist statement and their website URL’s as part of the gallery’s overall prize package.

Below is Francesca’s Artist Biography, her Artist Statement, along with 25 pieces of her mixed media creations.  We hope that you will take the time to read Francesca’s information and to take a look at her creative and fascinating mixed media art.

In her early life Francesca challenged herself by focusing on things that did not come naturally to her (e.g. going into Law after Classics). Yet, she tried for years to placate her internal restlessness by living in different countries and cultures (Pordenone, Padua, Denver, London, Paris, New York...); When she reached 40, with the responsibility of a mother, she settled between London and Trieste and found her outlet in what she liked and did best, namely using her hands to create.

Art exhibitions, painting and modelling clay were regular hobbies which never satiated her inherent creative nature. Finally one day, she entered the Scuola Mosaicisti del Friuli, in Spilimbergo: a whole new world of WONDERS opened up.

She wanted to learn how to do it properly. She found a delightful place in London, Southbank Mosaics, where she did a first Award course and a Level 2 Certificate - a place which she still regularly and enthusiastically attends twice a week. She also attends various courses per year at Scuola Mosaicisti del Friuli, Spilimbergo (Roman, Bizantine and Modern mosaic) and elsewhere.

Her philosophy is always to learn as much as possible, never to take anything for granted, and then - to make it hers!

Francesca’s mission is to make Mosaic ROCK. She wants to show it to the world as an art which can be incredibly rich… every material has at least one fascinating feature about it: the very nature of its texture and just the subtle tilt of a tile allow for different colours, reflections and shades depending on the angle of sight. Chances are that no two viewers will see it the same way at the same time.

Torn between optimism and surrender, Francesca is haunted by the idea of mankind’s imminent self-destruction. Yet, she still believes in a future for humanity of resourceful innovation through recycling and upcycling. She is fascinated by the colours and textures of both artificial and natural elements, which she enthusiastically hunts for in everyday life and restlessly plays with in new combinations, pairing and contrasting noble material with rubbish. Her aim is to prove their reciprocal need, how rubbish is a relative definition and how it can be turned into something useful, fun and even beautiful.

To Francesca, art has the same importance as philosophy: its ultimate purpose is to provoke something in the viewer of its time. As an artist, she feels a compelling urge to convey a message to the viewer, whether a thought or a pure emotion, as strongly as her technical and creative capabilities will allow.