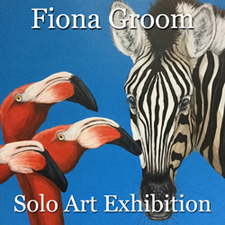 Light Space & Time Online Art Gallery is very pleased to announce that Fiona Groom has been selected as one of the four artists of the gallery’s recent tenth “Solo Art Series” Art Competition.  Fiona will now have a month-long solo art exhibition and she will be featured on the gallery’s front page, in the Gallery’s YouTube Channel, as well as in the “Solo Art Series” archive.

Fiona Groom is a professional artist based in Queensland, Australia and she specializes in creating expressive animal and leaf litter creature art.  It is Fiona’s desire is to show in her animal art the diversity of animal life by capturing her subject’s character and expression, while incorporating humor, which then results in the painting telling its own story.  Fiona will now be promoted by the gallery with an extensive public relations campaign.

In addition, as part of her award package, Fiona will now be featured as a Light Space & Time – Artwork Archive promoted artist.   Fiona’s art will also be featured on the gallery’s YouTube Channel and with an event postcard.

Below is Fiona’s Artist Biography, her Artist Statement, along with 20 of her paintings.  We hope that you will take the time to read Fiona’s information and to take a look at her unique and expressive animal paintings.

During this time she also had the opportunity to exhibit her work in several Solo shows and a variety of national arts festivals and group shows including an International Art Exhibition at Gallera360 in Florence and is represented by several local galleries.

Her work is in private collections throughout the world, here in Australia as well as in the UK, Canada, New Zealand, Europe, Singapore, and the US. Some recent publications have seen her work featured on the cover of Creative Artist Magazine Issue 11 2016 and Artist Palette Magazine No 155, these included a 10-page spread of her work and a workshop showing her painting process. She was also featured in a coffee table book titled Amazing Australian Artists.

Professionally Fiona’s activities have included a TV episode on Put Some Colour in Your Life and also several Artist residencies during a variety of exhibitions. Ms. Groom has also held the position of Gallery Curator at Yandina Historic House for the past 11 years which has given her plenty of opportunities to work with other Artists, organize and present artwork and become involved in an assortment of local community events.

Additionally, Fiona has organized and run several children’s art workshops, group exhibitions, art projects, painting workshops, and some community-based Artisan Markets. It is all these artistic opportunities that have helped her gain a better understanding of art making and in doing so has given her the direction and inspiration that she needed.

For her the animal kingdom is the driving force behind her art as she loves to delve into the diversity of animal life Fiona feels it’s important to capture the subject’s character and expression and incorporating their humor, their majesty and wonder, resulting in the painting telling its own story.

I draw inspiration from the uniqueness of the animal kingdom and in this body of work, my focus is on what lies above and below the fallen trees, leaves and dirt which is home to a diverse group of animals. Using acrylics and stretched canvas my compositions slowly comes to life and in the end, a new creation has established itself with its own story to tell.  Fiona's Website: www.fmgfionagroomvisualartist.com