Digital Art by Leon Sarantos is in the Photo Arts III 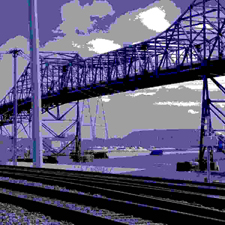 CHICAGO, IL – June 7, 2012 / Leon Sarantos is pleased to announce that his industrial art is on display in CornerStone Photo Arts III, a juried photography exhibit. The exhibit is at the CornerStone Art Center & Gallery in Whiting, Indiana throughout June and July 2012. The juror, Martin Martinez, is on faculty in the Media and Fine Arts Department at Calumet College of Saint Joseph.

Leon Sarantos uses digitally transformed photos to present scenes of the bridges over the Calumet River near 95th street in Chicago. Chicago is called the City of Bridges; many bridges were built along the Calumet River since its development in the 1860s. The Calumet harbor continues to be this region’s busiest port. The Chicago Skyway Bridge was built to be a shortcut from State Street in Chicago to the steel mills on the Southeast border with Indiana. Leon sees the notion of transformation as being true of this region on a symbolic level as well being his artistic media. “The vibrant colors in my photos represent the vital role this industrial hub played in developing the Calumet region.”

This is the third in a series of juried exhibits about photography and will be at the CornerStone Art Center, in the Center Bank Building, 1500 119th Street, Whiting, Indiana. The opening Reception is on Saturday, May 9 - 9 AM until noon. Cornerstone Art Center & Gallery is located 30 minutes outside of Chicago in NW Indiana in the Historic Downtown District of Whiting, Indiana.

The center is organized by the 119th Street Artists, which is a non-profit group that seeks to bring an appreciation of the fine arts to people in all walks of life and to provide support and encouragement to Midwestern artists. For further information about the center and this event, view their web site at http://www.119streetartists.org

Leon Sarantos originally grew up in the Midwest and currently lives in the Hyde Park neighborhood of Chicago, Illinois. He obtained a Bachelor of Architecture degree in the College of Arts and Architecture at the University of Michigan. After moving to Chicago, Leon continued his work in architecture and art, and studied at the Art Institute of Chicago and Hyde Park Art Center. Mr. Sarantos has exhibited his work extensively in solo and group art shows on a national basis. His website is: http://www.leonsarantosartist.com