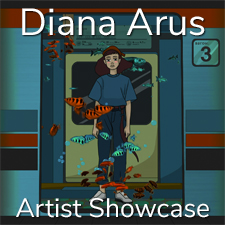 Light Space & Time Online Art Gallery is extremely pleased to announce that Diana Arus has been named as the Gallery’s new featured artist and she will now be promoted by the gallery for the next 14 days in the gallery’s Artist Showcase.

Diana is an award-winning artist based in Russia. Diana was selected as 1 of the top twelve finalists in the gallery’s 17th Solo Art Exhibition Series. The placement in this competition qualified her art to be showcased in this feature.

Diana’s Artist Showcase feature will be promoted to over 350+ major news outlets, with inclusion on Google News & Bing News. In addition, the gallery will also be featuring and promoting her artwork in the gallery’s various social media networks for further exposure.

Below are Diana’s Artist Biography, Artist Statement and 5 images that were submitted to this competition.

Diana Arus is a Russian/Syrian artist who was born in Tartous, Syria in 1992. She found her love for drawing when her older sisters used to draw in front of her. By the age of 10, she had a small exhibition in her home city as a guest with the professional artists, portraying her collection of Disney paintings.

At the age of 17, she moved to Damascus and started studying at the Damascus University, earning her Bachelor’s degree in Fine Arts, Graphic Design, in 2015. Her graduation project was an animated short film, describing feelings of oppression and judgment by the society. That same year, she moved to Moscow, Russia to escape the war and further her education.

She earned a Master’s degree in Saint Petersburg Faculty of Culture and Arts. After 4 years of having the wrong type of job in designing content for political purpose for a news channel, she moved on and is currently working as a Freelance Animator, Illustrator and Graphic Designer.

Diana's main passion is animation and all that goes with it from environments, illustrations, character design and production. She uses her experience in animation to portray certain emotions and moods with a hint of surrealism. Her equipment includes one laptop, with Photoshop, Adobe Animate and After Effects as the main software.

Real life excites me. The portrayal of this life as perceived by other people and artists has always been big inspiration for me. It pushes me to show my version of how I see the metro station, the bench on the side of the street, or that woman sitting across me and what she is thinking.

I draw inspiration from everyday life, from the mundane things I do and the places I pass by every day. Soft light surrealism is an important factor in my work. It is how I can describe that emotion, whether it was how I feel or how I wish it would be.

Diana’s work can be seen in her social media by the handle Dianimations, as well as her website https://www.dianimations.com/.