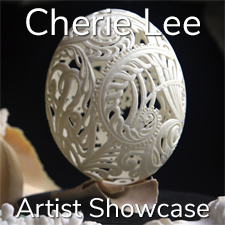 Light Space & Time Online Art Gallery is extremely pleased to announce that Cherie Lee has been named as the Gallery’s new featured artist and she will now be promoted by the gallery for the next 14 days in the gallery’s Artist Showcase.

Cherie is an award-winning artist based in New Jersey, USA. Cherie was selected as 1 of the top twelve finalists in the gallery’s 17th Solo Art Exhibition Series. The placement in this competition qualified her art to be showcased in this feature.

Cherie’s Artist Showcase feature will be promoted to over 350+ major news outlets, with inclusion on Google News & Bing News. In addition, the gallery will also be featuring and promoting her artwork in the gallery’s various social media networks for further exposure.

Below are Cherie’s Artist Biography, Artist Statement and 5 images that were submitted to this competition.

Cherie Lee is a self-taught Philadelphia-born artist who utilizes high-speed rotary equipment to reduce genuine ostrich eggshells to small-scale sculptures appreciating, and testing, the limits of faculty and frailty. Whether her subject matter be ecological, sociological or anthropological, she unites substance and subject, gingerly evoking one basic concept: what you have is fragile, no matter its strength.

Having grown up suburban-poor, her earliest materials were found objects in nature and readily available household items, predominantly paper. These early works resulted most often in two distinct styles: elaborate dimensional paper sculptures that are white-on-white plays of light and shadow, or detailed, flat black paper-cuts. Both styles notable for what they lack, or what's been taken away; a concept she hopes might foster a more solid appreciation for what *is* there.

Shortly after recognizing the humble chicken egg as the ideal 4-dimensional 'canvas' by dint of accident and ignorance, she stumbled upon where those styles merged. This intersection created a new path, and eggshells became her primary medium of choice, with the common household Dremel® as her sole, yet very limiting, tool.

With the advent of the internet, her practice expanded and deepened beyond her own expectations, and soon emu, rhea and ostrich eggs became the predominant objective. Immediately upon learning of dental drills as a carving tool, she saw the direction she wanted to go, and never quite lost sight of it.

What promised to be an auspicious career-start instead signaled her career's end. Even as one of her earliest pieces was being accepted to the United States White House Permanent Collection, a tragic death close-at-hand was triggering an emotional breakdown in the family, ultimately resulting in the artist sustaining a debilitating injury, further contributing to the household's dissolution. Thus evolved a permanently disabled single mother of two young boys, for whom 25 years would pass before she ever laid hands or eyes on that recently discovered dental drill.

The creative suspension was broken by the next significant life-disruption, marked by a tumultuous upending of hearth and home. This forced re-formation spurred the full-fledged return to her craft, with a compelling intent to master her medium. By October of 2018, she obtained her long-desired dental drill, and set to work with diligence. She is only now recognizing her own under-estimation of the medium, as well as her own skills, and is looking forward to seeing just how far she can push them.

Her interest and investigations into disability, poverty and homelessness come from a personal place, and her current path explores how much can be taken away from something, be it natural, man-made or conceptual, without it breaking.

“However,” she cautions, “if the strength of an eggshell allows me to push it to its furthest limits, its fragility reminds me not to.”

Eggshell sculptor Cherie Lee is looking at what falls between the cracks, and finding beauty and courage there.

It's a whole new life.

Throughout mankind's history, times of great socio-economic upheaval have heralded exponential leaps in creative and scientific advancement. Not within man's written history has such upheaval occurred on nearly a global scale, en masse. And yet, hovering here on the brink of one of humankind's most transformative eras, we are tasked with re-assessing our values, our beliefs, and even our own capabilities, while protecting and shaping the lives of our future.

As we collectively endure this painful rebirth, we naturally feel battered and bruised, scrambling for safety while trying to hold it all together; or worse: frightened, futile, maybe even defeated. With only a single cell of life itself, please allow me to demonstrate the infinite wonders of possibility. You may even recognize our own vast capacities within.

However ordinary, please don't see anything as mundane.

Wherever the unusual arises, approach it with curiosity.

What you consider to be strong, revere its frailty.

When you see something fragile, appreciate its strength.

For millennia, the small but mighty egg has been a powerful symbol of birth, life and rebirth. Using high-speed rotary equipment, I reduce genuine ostrich eggshells to small, spherical sculptures, which invite you to question what you believed, and find renewed respect for what you believe possible.

Each piece is no larger than 11 inches diameter, and is, itself, a quiet little meditation on our basic assumptions and perceptions.