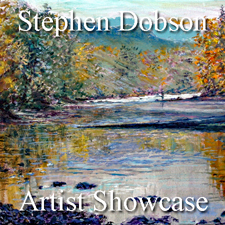 Light Space & Time Online Art Gallery is pleased to announce that Stephen Dobson is this month’s Featured Artist and will now appear in the gallery’s Artist Showcase for the next month.

Stephen Dobson was originally born in Manchester, England prior to immigrating to Canada at a young age and is a self-taught artist who loves painting. He is a very prolific artist who developed a signature style early in his career and was invited to join the Stave Falls Artist Group becoming one of the original members in the group.

Stephen works primarily with oil paints, striving to find light and color using confident brushwork and commonly uses pallet knives and his fingers while painting. He always tries to express his feelings about what he paints and hopes to bring the observer closer to his thoughts about the people, places and things he observes in his daily life and especially in the way people interact with each other and their surroundings.

Stephen has had all of his submitted works accepted by the American Art Awards and has won a number of 1st and 3rd place awards in a variety of Painting categories for the last three years. This is a competition open to all artists from around the world and is juried by 25 well respected galleries, across the United States.

Stephen enjoys travelling throughout the area he lives in Southern British Columbia and especially the City of Vancouver and the Upper and Lower Fraser Valley where he always discovers something fresh to paint.

Stephen’s original paintings can be viewed in his home studio located in Mission, British Columbia. His work is held in a number of private collections throughout Canada, the United States and Europe.  His website is http://stephendobson.com